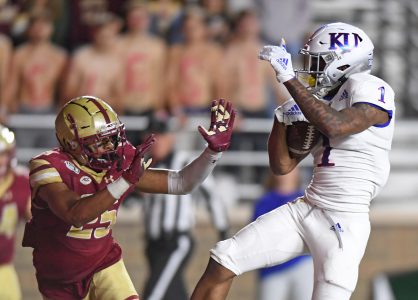 1. Stick with the spread

The Jayhawks proved at Boston College they can put up points when they get the ball to their playmakers in space. Utilizing a lot of three- and four-receiver sets, as well as run-pass option plays, KU scored 48 points, the most for the program in a road win since 1996.

The offense played so well that KU enjoyed its most productive game in terms of yardage (567), since totaling 570 in a 2016 rout of FCS foe Rhode Island.

Now that West Virginia has seen KU spread the field and succeed, the Mountaineers figure to be better prepared for those looks than BC. But that doesn’t mean the Jayhawks should hold back on the types of plays that worked so well for them.

It’s imperative for the KU offense to keep getting the ball to running backs Pooka Williams Jr. and Khalil Herbert and receiver Andrew Parchment in spots where they can have one-on-one opportunities.

“AP, Khalil and (me),” Williams said, “we’re a great impact to the offense, but it all starts with our O-line. If we didn’t have those guys we wouldn’t have nothing at all.”

Senior quarterback Carter Stanley said KU’s coaches put the entire offense in position to succeed with the play-calling. Stanley especially appreciated the use of RPO plays, as he first began studying and executing those as a freshman in high school.

“I just kind of felt like they were kind of on their heels the whole time,” Stanley said of the BC defense trying to adjust, “and I’m really happy for our guys. We had a really good week of executing it. It was definitely the most we’ve focused on it since this coaching staff has been here, but we all bought in and they did a pretty good job of executing it.”

It’s safe to assume KU’s offense will still put a tight end or two and a fullback on the field at times versus WVU. But now the coaches and players have experienced how well a more modern approach can work.

KU’s defense in nonconference play proved far more consistent than its offense. And the Jayhawks never looked better in the first three weeks than they did in the second half at Boston College.

On seven possessions in the third and fourth quarters, the Eagles went scoreless, averaging 3.6 yards per play. They went three-and-out three times.

“It boosted our confidence a lot,” senior nose tackle Jelani Brown said of KU’s defensive showing. “I feel like a lot of us feel real good. It makes us practice harder because we want to continue to win.”

“I was really excited to see that, but I honestly wasn’t surprised just because I know how hard our defense can play and how good of a defense we can be when we communicate,” Prox said. “There’s no reason we can’t do that moving on throughout the season as long as we just do what we’re supposed to do.”

Through West Virginia’s first three games, its offense has been up and down (see: 34 rushing yards in the opener versus James Madison, 30 rushing yards in a loss at Missouri and 173 rushing yards in a win over North Carolina State). But the Mountaineers run an RPO-based system with quarterback Austin Kendall that will require KU’s defenders to once again use the type of in-game communication Prox referenced.

WVU running backs Kennedy McCoy and Alec Sinkfield both are averaging fewer than 3 yards per carry. The biggest weapon for the Mountaineers has been 6-foot redshirt freshman Sam James, whose 20 receptions (6.7 per game) rank third in the Big 12 and 19th nationally.

KU’s defenders will have to keep talking and stay assignment sound to make sure they are in position to stop the reads being made by redshirt junior Kendall (669 passing yards, 64.5% completion rate, six touchdowns, three interceptions).

Brown said the Jayhawks know Big 12 play will be different.

“The offenses are faster paced than the teams that we’ve played before,” Brown said. “It’s just preparation and getting used to it.”

The veteran members of KU’s secondary pride themselves on their takeaways, what with their success in creating them throughout the 2018 season. So they weren’t too happy when their victory at BC lacked what they would consider some signature highlights, considering that they were available.

“I think it is contagious, really, because people were just dropping them like flies,” Lee said, happy to joke about it a few days later. “I’m like, ‘Hold on. That’s free money.'”

In the third quarter, redshirt junior corner Kyle Mayberry let a potential interception drop out of his hands in the end zone. Then senior safety Jeremiah McCullough had to settle for a pass breakup after jumping a throw in anticipation of a pick.

In the fourth, both McCullough and Mayberry had one would-be interception slip through their fingers again.

“It was like we’ve got to get on the Jugs (machine) after practice now since nobody can catch,” Lee said.

Although Lee doesn’t yet have an interception this season, he said those players who dropped some would hear from him every single day this week.

“Even at practice,” Lee said. “I told J-Mac not too long ago in the weight room, ‘You get no handshakes from me. You dropped two house calls.'”

Through three games, KU has only two takeaways — a Hasan Defense pick-six against Indiana State and a Hempstead interception later in that same game.

Stanley went the entirety of KU’s win at Boston College without facing much pressure. In fact, the Eagles failed to sack him even once.

“That’s always nice,” Stanley said of KU’s offensive line keeping him clean. “They played a great game on Friday. They had a great week of practice leading up to it. I’m incredibly thankful for those guys, and they know I’ve got their backs.”

Keeping Stanley upright and in a flow offensively might prove more difficult to accomplish for the Jayhawks’ O-line this week against a WVU front that has spent plenty of time in the backfield early in the season.

With nine sacks so far, West Virginia currently is tied for the Big 12 lead with Oklahoma and ranks 25th in the nation.

That pressure isn’t coming solely off the edge either. KU’s offensive linemen inside will have to be aware of the pass-rush ability of WVU tackles and watch out for the Stills brothers in particular.

Sacked twice in both of KU’s first two home games, against ISU and Coastal Carolina, Stanley likely will have to make decisions and throws on the move against WVU after enjoying a comfortable win at BC.

How KU’s O-line sets Stanley up for success will play a significant part in the outcome of the Big 12 opener. And the blockers, of course, will need to create lanes for Williams and Herbert as well.

WVU has 21 tackles for loss on the season, ranking fourth in the Big 12 and 41st nationally.

Each of the KU head coaches to follow Mark Mangino failed to win more than three games in a season between 2010 and 2018. Les Miles is now a Saturday victory away from getting his first KU team to 3-1.

The program hasn’t won at least three of its first four games since its 5-0 start in 2009, Mangino’s last season in charge.

The prospect of giving KU its best start since then is an intriguing one to the current group of Jayhawks, who enter Big 12 play feeling empowered by their win at BC.

“We’re starving,” Prox said. “We need it bad. We’re really trying to show the Big 12 and every other major conference that we’re a major team.”