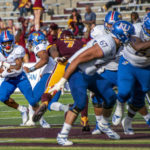 KU has to put the ball in star running back Pooka Williams Jr.’s hands as often as possible every week. But when the Jayhawks are playing on the road as a three-touchdown underdog that simple and obvious offensive strategy becomes even more critical.

In his sophomore debut versus Coastal Carolina, after serving his one-game suspension in the opener, Williams touched the ball 24 times on offense and netted 109 total yards between his 22 carries and two receptions. He even went back to return punts early in the game — and had to wear No. 89 while doing so, as KU’s other key player who wears No. 1, senior defensive back Bryce Torneden, also was part of the return team. However, Williams never got a chance to turn in a punt return and add to his yardage on special teams.

Even though Boston College, no doubt, will expect heavy doses of Williams in this nonconference matchup of ACC and Big 12 teams, Williams has game-breaking ability in the open field and he can only help keep KU competitive if he is getting the ball.

Against Coastal Carolina, Williams’ longest run went 15 yards, but he thought he was close to breaking loose on a few of his shorter runs.

“I felt very good, but at the same time I blame myself,” Williams said, “for not making the O-line really — I feel like I should score every time. And all the running backs should feel like that.”

KU, of course, only scored once in its loss to Coastal Carolina. And while the issues on offense were many, Williams said KU was unproductive because he and his fellow running backs didn’t make enough plays.

“We’re going to take the blame for it because they trust us with the ball,” Williams said. “Our O-line, they were blocking and everything. We’ve got to make them better.”

“I would expect that we have some real weapons on offense, and I think that those weapons will show more,” Miles said. “I think Pooka’s arrival, we’re not up at 100% full speed for Pooka — we just haven’t gotten the things in place and certainly have worked along those lines, I can tell you that.”

An upset recipe for KU at Boston College includes Williams being heavily involved and finding the space to take what would be short gains for other players into long touchdowns.

2. Clean up the turnovers

Speaking of formulas for road success, KU quarterback Carter Stanley can’t afford to turn the ball over the way he did in the first two games if the Jayhawks want to win on BC’s home field.

KU already has surrendered 20 points off turnovers this season, and the three lost fumbles and two interceptions came in Lawrence not in hostile territory.

Boston College, which opened the season with a 35-28 home win over Virginia Tech and followed that with a 45-13 thumping of Richmond, has proven it can create turnovers, too.

The Hokies gave the ball away five times during their trip to BC. The Eagles have snagged five interceptions through two games and have recovered two fumbles. Their seven takeaways rank second among all FBS teams, trailing only Arizona’s eight. Boston College leads the country in turnover margin, at +3.0 per game.

Stanley threw two interceptions against Coastal Carolina and was credited with two lost fumbles against Indiana State (the QB also threw an errant lateral that went down as a Dom Williams fumble). He said after reviewing the picks from this past week that it was clear to him that he tried to force the issue at times — guilty of trying to make something happen, as Miles put it.

“The two plays that instantly come to mind,” Stanley said, “are the two interceptions. And both were plays that I extended rolling out to the right. I definitely had other options on the first play, mainly being just to run the ball and get the first down. The second play I’ve just got to learn how to manage it better.”

Stanley said it was good for him to watch those botched plays a number of times and figure out what he could’ve done differently.

If the fifth-year senior QB is responsible for multiple turnovers again at Boston College, KU won’t have much of a chance.

3. Prepare to be tested, DBs

Coastal Carolina didn’t spend much time challenging KU’s secondary through the air. The Jayhawks’ group of experienced defensive backs won’t expect the same at BC.

After the Chanticleers went 8-for-14 on their pass attempts in Lawrence, for 119 yards and a touchdown, with no interceptions, the Eagles undoubtedly will not hold back in going after KU’s corners and safeties.

Boston College QB Anthony Brown didn’t need to throw the ball much against Richmond. And even though Brown enters this Friday night game 23-for-40 through the air with five touchdowns and no interceptions, he has proven effective with game-swinging connections to his receivers.

In BC’s win over Virginia Tech, Brown connected with Zay Flowers for a 58-yard strike and found Kobay White on a 56-yard chunk play. In Week 2, Richmond found Jake Burt for a 55-yard touchdown.

The Eagles’ 6-foot-2 redshirt junior QB currently is tied for the national lead with three passes covering 50-plus yards this season.

As far as passing attacks go, this will be the biggest challenge to date for KU cornerbacks Hasan Defense, Kyle Mayberry and Corione Harris, and safeties Mike Lee, Bryce Torneden and Jeremiah McCullough.

Just this past week, CCU running back C.J. Marable rushed for 148 yards and averaged 6.2 yards per carry against Kansas. Now the Jayhawks are about to face one of college football’s most experienced rushers.

If KU’s defensive linemen and linebackers can’t do better against 250-pound junior A.J. Dillon, it will be a long night for the Jayhawks.

Averaging 4.2 yards per carry so far this season, Dillon is the ACC’s active career rushing leader and ranks sixth among all FBS players with 2,964 rushing yards to his credit.

In 19 career starts and 25 appearances overall for the Eagles, Dillon has produced 12 career 100-yard games.

KU’s coach might as well have been talking about 240-pound sophomore David Bailey, too, when he offered that assessment. Bailey, 1 inch taller than the 6-foot Dillon, is averaging 5.4 yards per carry.

The challenge for KU, Miles said, will be getting numbers to the ball and “making sure that we match their intensity and play physical football ourselves.”

On the BC offensive line, the starting guards and tackles all are at least 6-5 and 305 pounds. The smallest man in the front five is center Alec Lindstrom, at 6-4 and 290 pounds.

A junior inside linebacker, Prox is averaging 10 stops per game.

Coming off a significant setback against a Sun Belt program in Coastal Carolina, KU now must face a BC team that looks capable of finishing in the top half of the ACC.

Even though the home loss to CCU was the type of potentially demoralizing loss the KU fan base has become accustomed to viewing over the past several seasons, neither Miles nor his players are choosing to look at it that way.

“I think this is exactly what I would expect,” Miles replied earlier this week, when asked if the building process at KU has proven more difficult than he expected.

“I never thought it would just be undefeated for the next five years,” Miles said, insisting that the Jayhawks, despite last week’s defeat, are improving. “And they will continue to get better.”

The former LSU and Oklahoma State head coach no doubt had the Jayhawks’ attention as they prepared on a short week for easily the best opponent on their nonconference schedule.