‘I suspect he’ll give us some Pooka plays’: Kansas RB returning ‘without limitation’ 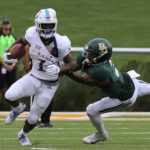 After coaching his first football game at the University of Kansas without the team’s All-Big 12 running back, head coach Les Miles is prepared to play Pooka Williams Jr. “without limitation” this week versus Coastal Carolina.

While some may have wondered whether Miles might ease KU’s leading returning offensive playmaker into the rotation following Williams’ one-game suspension for an offseason arrest and domestic battery charge, Miles said Monday no such strategy exists.

“I can tell you that we’ve determined that he’s going to play, and play early and play late,” Miles said during his portion of the Big 12 coaches teleconference.

In 2018 as a true freshman, Williams ran for 1,125 yards — the eighth-best total in program history — and seven touchdowns, becoming a first-team all-conference performer.

The accolades were followed this past December with his arrest and suspension from all team activities, due to an altercation with a woman with whom Williams was in a relationship. After a diversion agreement was reached in the case, Miles reinstated Williams in July and KU announced the sophomore back from Louisiana would be suspended for the season opener.

Although Miles said earlier this summer that he planned to have Williams address the team and explain what he should have done differently, Miles said during his Monday afternoon press conference that hasn’t happened at this point.

Following his troubling offseason, Williams, who has not yet been made available to the media for interviews, sought out teammates and spoke with them one on one, according to senior quarterback Carter Stanley, who said such gestures meant “a lot” to the QB and other Jayhawks.

“He didn’t approach or say anything to the team. But that’s just kind of like — he’s kind of shy,” Stanley said. “And, honestly, I didn’t really expect anything like that.”

Stanley recalled that shortly after Williams, who missed all of spring football, was allowed back around the team, the running back called the QB over in KU’s locker room.

“I gave him a big hug and stuff. He just was ready to flush it,” Stanley said of Williams bringing up his offseason incident and suspension. “I know he had been working on his own at that point. And he just said that he was thankful and glad to be back.”

KU beat Indiana State without Williams to open the season, but it’s clear the offense, which scored just two touchdowns in a 24-17 victory, would benefit from the presence of its 5-foot-10, 170-pound rusher and receiving threat (Williams also caught 33 passes for 289 yards and two touchdowns as a freshman).

“Well, I think he’s a very strong player,” Miles replied, when asked what Williams’ return meant for the offense. “We’ll have to integrate him into the team yet again. And yet I suspect he’ll give us some Pooka plays. We’re looking forward to having him back, I can tell you that. He’s enjoyed by his teammates, and he’s really — we’ll enjoy him in the huddle, we’ll enjoy him eating, we’ll enjoy that man.”

Pooka Williams watched KU’s Week 1 win from the bleachers. While Stanlely wouldn’t say the offense will look “completely different” with Williams in uniform and on the field versus Coastal Carolina (6 p.m. kickoff, ESPN+), the QB is excited to find out what Williams’ return will mean for the team’s success.

“It’s big,” Stanley said. “Obviously just seeing what he did last year as a freshman and helping out this team was special.”

Williams accounted for at least two touchdowns in three different games in 2018, when he produced four 100-yard rushing games, as well as a 100-yard receiving outing.

“It seems like he does something new every day that kind of impresses us, to be honest,” Stanley said.

Sophomore KU cornerback Corione Harris has known Williams for years, as they both grew up playing youth football in the New Orleans area. The duo from Louisiana were the most highly touted signees in KU’s 2018 recruiting class.

Harris is convinced Williams will make an immediate impact for the Jayhawks (1-0) this week.

“I know when he gets the ball,” Harris predicted, “he’s going to make it well known that he’s back.”