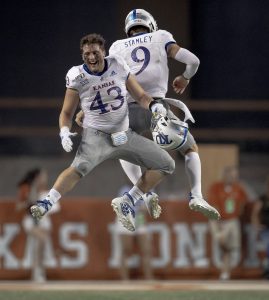 Joe Dineen felt confident roughly a decade ago that the oldest of his three younger brothers, Jay, possessed the fire required to play linebacker.

Jay didn’t prove this to Joe on a football field, though. Joe’s revelation came in the basement of their parents’ home in Lawrence.

Joe’s recollections this week brought his mind back in time to that setting, as the former University of Kansas linebacker and the rest of his football-loving family have more anticipation than usual for this week’s Sunflower Showdown, which will pit Jay, a KU linebacker, against Jax, a Kansas State fullback.

Both Jay and Jax, Joe recalled during a phone interview with the Journal-World, always were strong when they were younger. But Jay could get a little more intense in his interactions with Joe, the oldest of four brothers.

As Jay recalled, he and Joe, both roughly middle school-age at the time and separated by three years, were watching a UFC fight when they decided to head downstairs for a brother versus brother wrestling match.

“It started off playful,” Joe shared. “And when it got serious I got like scared.”

It was when Joe put Jay in a headlock, the younger of the two remembered, that the situation escalated.

“I wasn’t happy about it,” Jay told the Journal-World. “And I wasn’t tapping, so he wasn’t letting go.”

Jay’s solution? Knock his older brother off his feet with a tackle.

Joe would be fine. The big-screen box TV that served as a backdrop for the encounter? Not so much.

“We went right through it,” Jay said, cracking up at the thought. “We were sitting in it.”

Jay apologized and helped Joe out of the old and suddenly demolished TV before both brothers were sent to their bedrooms.

Jay and Jax didn’t ever wreck any home appliances during their battles as youngsters. But Jay said they were at each other’s throats from time to time, even though they also teamed up against Joe and the youngest Dineen brother, Jet, regularly.

“I think that’s what makes our relationship so good now,” Jay said.

Jay and Jax FaceTimed on Sunday night, but Jay said their regular weekend discussion didn’t involve any trash talking about the upcoming rivalry game (2:30 p.m. Saturday, FOX Sports 1) in their hometown. More of their conversation focused on big victories that occurred the day before, when K-State (5-2 overall, 2-2 Big 12) knocked off Oklahoma and the Jayhawks (3-5, 1-4) defeated Texas Tech.

Jay planned to text Jax at some point before their teams square off at David Booth Kansas Memorial Stadium, to wish him good luck and tell his brother that he loves him. 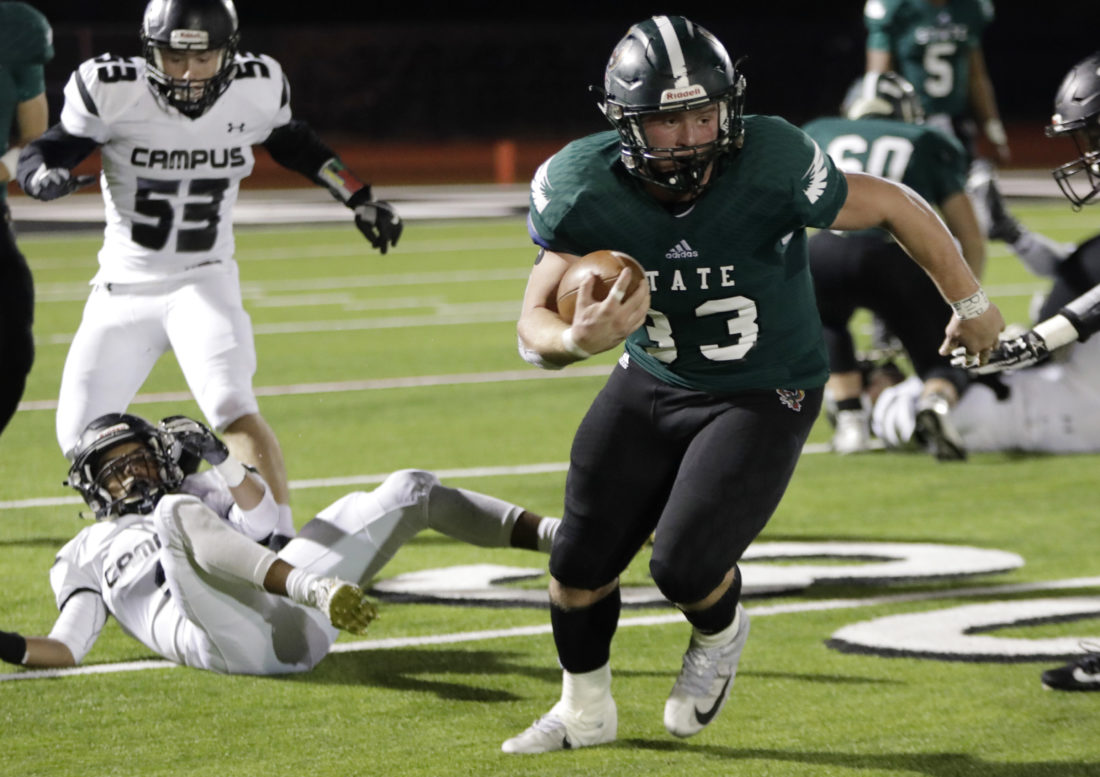 Free State’s Jax Dineen (33) leaves defenders behind him as he picks up yardage in a 6A sub-state game against Haysville-Campus Friday night at FSHS.

“Then he’s a rival,” Jay said of the time from opening kickoff to the game’s conclusion.

It’s that portion of Saturday that has some Dineens itching to see what happens and at least one of them apprehensive.

Neither Jax, a true freshman, nor Jay, a redshirt sophomore, is a regular. Jax has played in six games so far, but he isn’t listed on the Wildcats’ depth chart. He has two catches for 14 yards and no carries on the season. Jay is a second-string inside linebacker for KU who has made 19 total tackles while playing in every game as a reserve.

But if the rotations for the KU defense and K-State offense time out just right?

“It’s inevitable,” Joe said, “that they’re going to run into each other and have collisions and stuff like that” — even if it’s just Jax getting out to block and Jay trying to go make a play.

“Oof. I don’t know,” Joe said. “If they both squared each other up, man… That might be a stalemate. It might go one way one time and the other way the next. I have no clue what’s going to happen with that.”

That’s the part that both Joe and Jay said worries their mother, Jodi.

“She’s been nervous about this day since the beginning of the season,” Joe said. “She doesn’t even want to go.”

Of course, Jodi and her husband, Joe Sr., will be in the stadium to see what happens. Jay thinks Jodi, even though she played volleyball at KU, might wear some blue and purple to represent both sons, but wouldn’t be surprised if Joe Sr. shows up in black or neutral attire.

Jay described it as a win-win for his parents.

“I mean, anytime you get to see both your kids play on a big stage against each other,” he said, “it’s always awesome.”

Jay and Jax never played on opposing teams as kids, so Saturday will be a first for them and the rest of the Dineen family. And they might have entered this weekend as teammates had Jax’s recruitment played out differently during his senior year at Free State.

According to multiple sources with knowledge of the situation, K-State offered Jax a scholarship while KU wanted him to walk on.

“I know that it was probably not easy for the Dineen family to see somebody go to Manhattan,” K-State head coach Chris Klieman joked earlier this week. “But, in the same respect, Jax loves it here. He’s a great fit here, and he has a lot of good buddies here. He’s embraced being a Wildcat, and he loves being a Wildcat. I’m excited to see him, not only this week, but as he continues on his career.”

And Jay harbors no ill will against his brother for signing with K-State two years after Jay — and five years after Joe — signed with KU.

“I love him up until the game. I love him right after the game,” Jay said. “But during the game, he’s got to be a rival.”