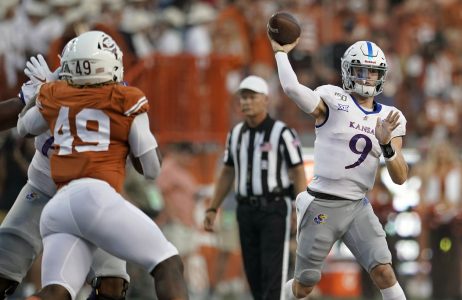 Kansas' Carter Stanley (9) looks to pass under pressure from Texas' Ta'Quon Graham (49) during the first half of an NCAA college football game in Austin, Texas, Saturday, Oct. 19, 2019. (AP Photo/Chuck Burton)

Austin, Texas — In college football, motivational ploys know no bounds. And it appears one such behind-the-scenes tactic carried out by the Kansas staff this past week left its mark on quarterback Carter Stanley.

After the senior helped the Jayhawks take a 1-point lead late in the fourth quarter at Texas on Saturday night with successful touchdown and 2-point conversion throws, Stanley could be seen on The Longhorn Network’s broadcast of the game blowing a kiss to the UT crowd and flashing a “Horns down” gesture with both of his hands.

Following a 50-48 Texas victory, solidified by a last-second field goal 1:11 after Stanley’s display, the senior QB explained what led to him punctuating KU’s go-ahead score in that manner.

“Definitely an emotional game. I think we received a lot of disrespect before this game,” Stanley began, while speaking with a small group of reporters after head coach Les Miles’ press conference.

“I actually love Texas,” Stanley continued. “I love everything about this place, really, except for kind of one guy on the coaching staff on that sideline. You’ll probably figure out who it is based off his press conference earlier this week. So I don’t have a lot of respect for that individual. But it was unfortunate we came up short.”

Although UT head coach Tom Herman didn’t say anything derogatory about the Jayhawks (2-5 overall, 0-4 Big 12) leading up to the Big 12 matchup at Darrell K Royal-Texas Memorial Stadium, it appears Stanley and other KU offensive players were presented a line from Herman’s Monday session out of context.

Roughly 17 minutes into his press conference, which came two days after UT’s rivalry game loss to Oklahoma, a reporter referenced the next game on the schedule, against KU.

“We actually play a game this week?” a smiling Herman asked.

KU receiver Andrew Parchment referred to those exact words when discussing why he thought the Jayhawks felt disrespected.

While the Jayhawks showed no signs in their postgame remarks that they were made aware of the circumstances of Herman’s question, the ruse seemed to have its intended effect.

The Jayhawks produced a new season-high for total offensive yards with 569. Stanley completed 27 of his 47 throws, connecting with nine different targets for 310 yards, with four touchdowns and no interceptions.

Pooka Williams Jr. rushed for 190 yards and a pair of touchdowns. Stephon Robinson Jr. caught seven passes for 67 yards and two TDs, Kwamie Lassiter II hauled in five passes for 66 yards, Parchment made three catches for 83 yards and a score and Daylon Charlot finished with three receptions for 47 yards as KU kept the field spread and the chains moving.

A fiery Stanley hoped the offensive display, which came in the debut of new offensive coordinator Brent Dearmon, would double as a bit of a message.

“We can and will do this every single weekend, if we play our game and we execute,” Stanley said. “I think the rest of the Big 12 should start taking Kansas a little bit more seriously.”