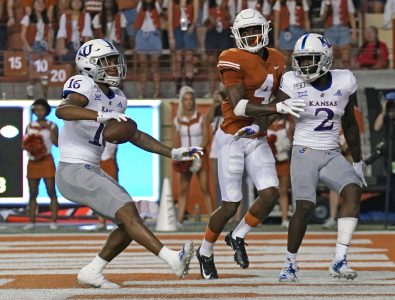 Austin, Texas — The Kansas football team lost on the last play of the game in offensive coordinator Brent Dearmon’s sideline debut Saturday at No. 15 Texas.

Even so, the offensive output fortified the Jayhawks’ conviction that the midseason switch to Dearmon will make a significant difference moving forward.

How would junior receiver Andrew Parchment grade their showing, after KU produced a season-high 569 total yards and averaged 6.6 yards per play?

Playing under Dearmon for the first time this season, KU senior quarterback Carter Stanley thrived much of the night in defeat. Stanley set new season-highs with 27 completions, 47 attempts, 310 yards and four touchdowns, and also went without an interception for a third straight game.

Not afraid to tuck the ball and take off — or lower his shoulder and truck a defender — Stanley rushed for a career-high 65 yards on nine carries, as well, and was only sacked once.

In the first five games of the season, when Williams often was asked to run the ball inside, his season-long rush was 36 yards. With Dearmon’s emphasis on getting his star sophomore running back the ball on the edge, Williams delivered a new season-best run in the first quarter at UT when he took off for 65 yards.

Williams finished the game with a new season-high for rushing yards (190), as well as a new career high mark for carries (25), as KU was able to run 86 offensive plays and only punted there times.

The Jayhawks (2-5 overall, 0-4 Big 12) hadn’t topped 500 yards in a game since their convincing win at Boston College in Week 3, when they first embraced a game plan that spread the field. KU was held below 400 yards in four of its first six games, before head coach Les Miles fired offensive Les Koenning during the October bye week.

So was this type of offensive show what he expected with Dearmon coaching the offense?

“Yeah, yeah,” Miles said after the narrow loss Saturday night. “We have really good coaches. I got guys that are fighting like hell to be a part of what we’re doing here, and Dearmon is one of them. There’s just a bunch of real quality people and the backdrop of that program is just doing a great job for us. You think that the people that leave the stadium will know Kansas? I think they will know that phrase. Kansas. It seems a little bit more now to me. Kansas.”

The Jayhawks and No. 15 Longhorns played a comparatively mundane first three quarters before venturing into the all points, all the time fourth.

According to Elias Sports, the wild final 15 minutes, during which KU and UT combined for 50 points, marked just the fourth time since NCAA classification in 1937 that two teams both scored at least 24 points in a fourth quarter. Per Elias, it was the first time that happened between two current Power Five program.

Texas, which was in the midst of a scoring drive when the third quarter concluded and the game was tied at 24, edged KU 26-24 in the fourth. Texas also outgained the Jayhawks 246 yards to 187 in the final quarter, when UT converted four of its five third downs and KU’s offense went 2-for-6 on third downs.

UT, meanwhile, on its six possessions that ended in the fourth, also produced three TDs and a field goal. The Longhorns’ boost came when Malcolm Roach blocked a Liam Jones extra point and D’Shawn Jamison returned it for 2 points with 10:06 left.

Only five games remain on KU’s schedule now. But some Jayhawks remain optimistic they can add another one to the 2019 slate.

After a 50-48 loss that players deemed encouraging, senior cornerback Hasan Defense explained what he thought the performance meant for KU.

“This just gives us the confidence to let us know we can compete with one of the better teams in the nation,” Defense told the Journal-World. “We’re just going to continue to fight. We have four games to win to try to get to a bowl game, and that’s what we’re going to try to do.”

To achieve six victories and bowl eligibility, the Jayhawks would need to either win out of go 4-1.

KU nearly delivered the program’s first ever win at Texas before the Longhorns improved to 9-0 all-time in Austin versus the Jayhawks.

But the underdog visitors at least took a lead at UT for a change. When Stanley found Takulve Williams for a TD and the receiver’s first catch of the season with 8:38 left in the first half, it marked KU’s first advantage on the scoreboard at Texas since 1997. It was KU’s eighth trip to Austin since 1997.