Self scouting, reflecting big part of bye week for Jayhawks 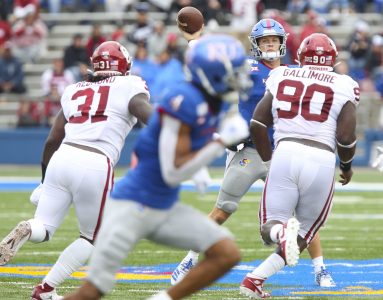 Even before Les Miles decided to make a drastic change on his coaching staff, firing offensive coordinator Les Koenning and promoting Brent Dearmon to O.C., the Kansas football coach knew the Jayhawks’ bye week would be critical.

Ahead of the team’s seven days of relative down time, Miles said not having a game this week would allow players who are “nicked up” to get healthy, and provide KU’s coaches a chance to review the plays from the first six games and see which ones worked and which ones “didn’t do well.”

The self scouting portion of the equation, Miles explained, would allow the coaches to see which plays opponents expect KU to run.

“And let’s see if we can put together a quality game plan such that they’ll not understand where we’re going,” Miles said six days before naming Dearmon the offensive coordinator, potentially overhauling the offensive game plan significantly.

With it being a bye week, KU players haven’t spoken with the media since postgame interviews following the loss to Oklahoma.

Senior quarterback Carter Stanley was discouraged by KU’s showing against OU in the sixth game of the season, even if the Jayhawks improved their production from the previous week, when they had their worst loss of the year at TCU.

“We had a different approach for this game,” Stanley said of facing powerhouse Oklahoma. “If you notice we were trying to milk the clock a little bit in the first half and just bank on executing and scoring on drives, but we didn’t execute as well as we could’ve and should’ve. But the first half of the season is over. We’ve got a big bye week coming up. We’ll do a lot of self reflecting and just make the most of it.”

Sophomore running back Pooka Williams, before Dearmon took over as O.C., said the next steps KU needed to take offensively to keep improving during the bye week centered around preparation.

“Getting better every time we meet. Every time we build more connections with our teammates,” Williams said, adding physical recovery would be helpful for the players this week, too.

Junior receiver Stephon Robinson said review also would be a necessary and important part of the bye week.

“Just watching film and building off the things we did good this past game, and also the things we did bad — trying to correct those mistakes and move forward, move on from it and just get better,” Robinson said.

Of course, for KU’s coaching staff, when they’re not involved with all of the preparation and adjusting that goes into the team’s bye week work, they’ll also be recruiting.

“We’ll make contact,” Miles said. “We’ll be in your school.”