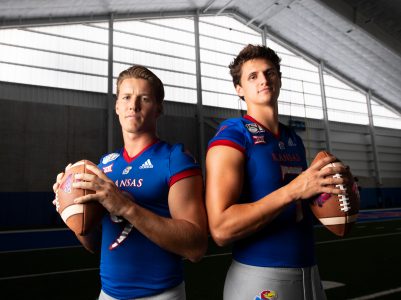 This Saturday Carter Stanley will play his final game at the University of Kansas.

Once it’s over, the Jayhawks will have to replace a senior starting quarterback leaving the program ranked second all-time in touchdown passes (37).

As much as the focus this week for head coach Les Miles and his players will be on the season finale versus Baylor (2:30 p.m., ESPN), Miles obviously is aware that the QB position officially becomes a question the instant KU enters the offseason.

And the answer very well could end up being Thomas MacVittie.

Although KU’s coach was asked whether the team’s QB options moving forward might involve the NCAA transfer portal or recruiting, Miles didn’t address those possibilities directly.

“We’re looking for guys that first of all would have the ability and the skill and the talent,” Miles said of future KU starting quarterbacks, “but we’re also looking for those guys that we want to have leadership ability and can step onto a campus and be kind of comfortable.”

Of course, KU’s 2020 starting QB might already be in the building. This past offseason, Miles spoke highly of MacVittie, even saying the junior college transfer in July had a slight lead in the competition over Stanley.

After the older and more experienced Stanley eventually won that battle, and has started every game since, whatever growth MacVittie has made as a passer has gone on behind the scenes, during KU’s closed practices.

Although Miles revealed the 6-foot-5, 225-pound reserve QB has been “nicked” and missed practice time in the “back end of the season,” the coach said he and his staff have been able to further evaluate MacVittie during practices this season and witnessed some positive attributes.

“He’s big, tall, can see the field,” Miles said of MacVittie, “has a strong arm, can make those throws and likes the ability to run the football. We would see him as a viable — very viable — candidate.”

On this, the last week of KU’s 2019 season, the roster currently lists eight quarterbacks. Stanley and walk-on Manny Miles are the only seniors. MacVittie, who redshirted at Pitt in 2016, is the only junior.

Miles Kendrick, who appeared in four games for KU in 2018 but took a redshirt, is a sophomore, as is walk-on Miles Fallin.

Three QBs are freshmen: Torry Locklin, and walk-ons Jakob Ahlschwede and Jordan Preston. Miles said Monday Locklin, who has played in four games this year already as a Wildcat QB and running back, will sit out this week and use this year as his redshirt season.

But the Jayhawks will add another scholarship QB in Jordan Medley, a 6-2 athlete who was listed as part of the 2019 signing class but won’t enroll at KU until the upcoming spring 2020 semester, as a grayshirt.

Stanley said he loves the QBs he has been around this season, calling them “a bunch of hard workers,” and noting the growth he has seen among the group during spring and in-season practices.

“Definitely some capable guys in that room with Miles Kendrick, Miles Fallin and Thomas MacVittie,” Stanley said, “and even some of those younger guys are working. So I think they’re in good hands, especially with the coaching.”

According to Stanley, the man he beat out for the starting job this year is “always, always” working, too, even though MacVittie has only checked in for a couple of plays this season, lining up at receiver on both occasions and throwing an interception on a trick play — his only pass attempt to date in a KU uniform.

“I know this season wasn’t maybe what he’s hoped for,” Stanley said of MacVittie, “but he still put his head down and he’s been grinding every day. He’s a great kid with great character.”