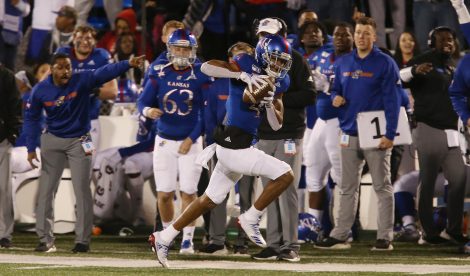 Kansas wide receiver Andrew Parchment (4) runs close along the sidelines after a catch and runs for a second-half touchdown in the Jayhawks' 37-34 win Saturday.

1. For the umpteenth time: start faster

If you feel like you’ve heard this one before, that’s because you have. The Jayhawks have spent the better part of their first season under head coach Les Miles talking about how they need to establish a lead instead of falling behind.

Coming off their second bye week of the season, they have found themselves trailing by at least two touchdowns in the first half five games in a row.

Obviously they can’t very well afford to do that again on the road against a ranked opponent. Senior KU quarterback Carter Stanley, who so often this year has gone out of his way to take the blame for the team’s repeated deficits, said the Jayhawks tried during this past bye week to address the trend in part by going through more team and 11-on-11 situations earlier in practices.

“I think we definitely needed that, and I think our guys handled it well,” Stanley said. “But I think it’s really just a mindset and a matter of execution. You can’t go out there and be gun shy. You can’t try and ease yourself into it. You’ve just got to go out there and attack.”

Miles, while pleased with KU’s work in practices, said the Jayhawks have to prove now that they can start faster on game days.

“The best offense that we have is when all cylinders are operating,” Miles said. “Pooka (Williams Jr.) carrying the ball. We have four or five receivers that can go onto the field to make big plays. We have Carter that can make the pass. That’s the best way that this offense operates.”

Junior receiver Andrew Parchment had another idea that might work for the offense, in its quest to put up some points early.

An offensive coordinator for Miles at OSU once upon a time, the man who took over the Cowboys when Miles left said the offense that KU now runs doesn’t exactly feature many of the plays Miles preferred back when they were co-workers.

“My history with him is tight ends,” OSU head coach Mike Gundy said earlier this week. “And then movements and shifts and motions and things like that. And that went on at LSU. So this is more of a different flavor than I would be accustomed to in the meeting room with coach.”

Such old-school plays often weren’t cutting it earlier this season, and since Dearmon took over as OC midseason the offense has looked most impressive when Stanley and receivers such as Parchment, Stephon Robinson Jr. and Daylon Charlot stretch the field.

That wasn’t lost on Gundy. While he praised the open-field ability of Williams, as well as Stanley’s effectiveness as a rusher, he circled back to another trait that grabbed his attention as OSU prepared during its bye week for the Jayhawks.

Those two are proven deep threats, and these are the types of plays that can break open games. The Jayhawks will have to keep finding and capitalizing on such opportunities to compete.

“There’s a lot of wide receivers in this league that are very capable of defeating man coverage,” Gundy said, “and there’s guys on this team that we’re getting ready to play.”

So far this season, OSU’s defense has given up 16 passing plays of 30-plus yards, which ranks 87th nationally. The Cowboys’ passing defense ranks 119th (275.6 passing yards allowed per game), and they’ve surrendered 7.6 yards per pass attempt (77th).

3. Rediscover and make use of that mojo

After looking so promising in the first two games under Dearmon, KU’s offense all but died in a 38-10 home loss to Kansas State. That brutal opening Saturday of November didn’t rattle the Jayhawks’ confidence, though, Stanley said.

“Win or lose, not a lot of it carries over to the next week, or in this instance two weeks,” Stanley said. “This group is very resilient, I’d say. Our coaches do a great job of, win or lose, we turn the page and we get on to that next opponent. We’ve got a lot of playmakers on this team that are going to be ready.”

The Jayhawks’ offense got in such a groove at times against Texas and Texas Tech recently that Parchment said players felt like they were going to score on every possession.

“We’ve got to get that mojo back and that juice back,” Parchment said, “and I feel like our plays will start coming if we carry on that juice.”

Not unlike when a shooter gets hot in basketball and feels like every attempt will drop, Parchment thinks KU’s offense got that hot versus the Longhorns and Red Raiders.

“It didn’t matter what was called,” Parchment said. “We were going to get 6 or 7 yards on the play. Football, you can definitely get in that same type of rhythm, as well. And when we’re in it, it’s kind of hard for us to get out of it. I feel like we get back on that rhythm, back on that path, we’ll be a very hard team to stop.”

And if the Jayhawks are feeling hot again against an OSU defense that ranks 101st in yards per game allowed (438.2) and 83rd in yards per play (5.84), there might be an easy way to gauge their confidence.

“When we get the heat check, that’s when we throw it up to Daylon,” Parchment said.

KU will need fortune, preparation, execution and everything imaginable versus the Cowboys’ breakout running back, considering the Jayhawks’ lack of success as a rushing defense this season.

A 6-foot-1, 207-pound force in the backfield, Hubbard already this year has rushed for 200-plus yards four times (versus Oregon State, Tulsa, Kansas State and TCU) and topped the 100-yard mark in four other games.

All of that adds up to make Hubbard the FBS leader in rushing yards, with 1,604 on the season. He’s averaging 178.2 yards per game — more than 30 more than the country’s No. 2 back in that category, Boston College’s AJ Dillon, whom you may recall rushed for 151 yards and a TD in a loss to KU.

Against such a strong runner like Hubbard, who is known for breaking tackles and extending plays, KU junior cornerback Kyle Mayberry said gang tackling will be a must.

“I think he’s going to get drafted,” Mayberry said. “He’s a great running back. So we’ve all got to get to the ball and wrap up.”

With 18 rushing touchdowns on the season and a 7.64 yards per carry average, Hubbard has gashed opposing defenses all season.

“Our front seven,” Miles said, “has got to make tackles. He’s a talented back, one of the best backs in the league certainly. The defense, this will be a great test.”

Of course, the KU run defense gets tested just about every week. The Jayhawks have allowed opponents to rush for 235.3 yards per game (126th) and are giving up 5.0 yards per carry (108th).

Nonetheless, KU senior safety Mike Lee said he, for one, is excited for the challenge of taking on arguably the nation’s No. 1 running back.

“We know they want to run the ball,” Lee said, “so we’ve just got to prepare and see who’s going to be more physical.”

Beginning with this trip down to OSU, the Jayhawks have three more chances to make Year 1 of the Miles era at KU a success.

And the Jayhawks, after a four-TD loss at home, at least aren’t talking like players who have checked out mentally or lost hope.

“What I liked to see was everybody wasn’t just down and ready to end the season,” Parchment said of the team’s reaction to an admittedly disappointing showing in its most recent game.

“Everybody believes that we still can get to a bowl game, and that’s what we come out here and work for every single day,” Parchment went on. “People only see Saturdays. They don’t see what we go through during the week. And we’re out here busting our — every single week, trying to give Jayhawk Nation a great show on Saturday.”