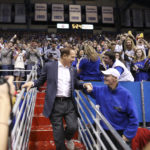 Newly-hired Kansas football coach Les Miles shakes hands with a fan as he is introduced to the Allen Fieldhouse crowd during halftime of the Jayhawks’ game against Stanford.

Kansas football fans around the Sunflower State who are eager to see head coach Les Miles in person before the Jayhawks’ season opener will have a few opportunities to spot The Mad Hatter in the coming weeks.

Kansas Athletics and the University of Kansas Alumni Association announced Wednesday the continuation of their annual “Hawks & Highways” series of programs in communities throughout the state, with Miles headlining four of the stops.

“I am looking forward to getting out and meeting many Jayhawks across the state of Kansas,” Miles said in a release. “These events will be a great opportunity for me to share the vision we have for Kansas football with people who are very important to our program — our alumni and fans.”

The trek kicks off Tuesday, May 21, in Dodge City, with Miles in tow. The first-year Kansas coach, formerly of LSU and Oklahoma State, also is scheduled to appear at “Hawks & Highways” stops in Independence (May 22), Salina (June 11) and Wichita (June 25).

Per KU, additional university and athletics representatives will be announced at a later time. The series also incorporates academic departments and entities from KU.

The Jayhawks’ 2019 season, Miles’ first in charge of the program, kicks off Aug. 31 at David Booth Kansas Memorial Stadium, where KU will play host to Indiana State.

KU at BC kickoff time announced

The ACC announced on Thursday kickoff times for football games that will air during the first three weeks of the 2019 college football season on the new ACC Network.

Among those was KU’s trip to Boston College.

The Jayhawks’ nonconference finale on Friday, Sept. 13 at Alumni Stadium, in Chestnut Hill, Mass., is slated to start at 6:30 p.m.

All ACC Network games also are available on the ESPN app to authenticated cable subscribers. Per the ACC Network, carriage agreements for the new network already are in place with the following video providers, among others: Altice, DirecTV, Google Fiber, Hulu Live TV, Optimum, PlayStation Vue, Suddenlink, TVision and Verizon Fios. A search on GetACCN.com for current ACC Network providers in the Lawrence area listed: DirecTV, Hulu and PS Vue.