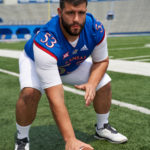 The NFL Draft came and went this past weekend without a member of the Kansas football program hearing his name called.

But a few days later not even the first round of the Canadian Football League’s draft had completed before a Jayhawk was off the board.

A Toronto native, the 6-foot-1, 298-pound Fontana finished his college career at KU as a graduate transfer, after playing previously at the University of Houston and the New Mexico Military Institute.

In a post-draft interview with the Ottawa Sun, Fontana described himself as an aggressive O-lineman.

“I’m a physical player,” Fontana said. “I like to play scrappy. I think I’m a bit polished, but I don’t think I’ve reached my maximum potential yet. I’m still light years away. With the right coaching, I can elevate more as a player. I spend all of my free time watching football, I’m always in the facility, I’m always in the training room. I’ve dedicated my whole life to football.”

Fontana started nine games at center for KU in 2018, and appeared in all 12.

According to the Ottawa Sun, Fontana will attend the Kansas City Chiefs’ rookie minicamp this weekend. But Redblacks general manager Marcel Desjardins told the Sun that Fontana is “all in on the CFL” if his minicamp trip to Kansas City doesn’t lead to something permanent.

Per the CFL’s online team rosters, one former KU player is currently part of an organization: receiver Joshua Stanford (BC Lions).

A former standout running back at KU, Jon Cornish will be inducted into the Canadian Football Hall of Fame later this year, following a successful nine-season career with the Stampeders.