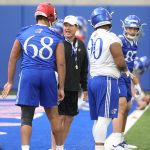 As their college careers came to an end this past November, the seniors on the 2018 Kansas football team closed a chapter of their lives just as a new one was opening for the program.

“Everybody’s super-busy at the time,” Wise recalled earlier this week, explaining how he only met the man saddled with turning around the long-struggling program briefly when Miles was first settling in at KU’s Anderson Family Football Complex and Wise was on his way back to Texas to start preparatory work for the NFL Draft.

With Wise back in Lawrence all of this week, in order to take part in KU’s pro day, that changed. The All-Big 12 defensive lineman said he and Miles “chopped it up” and had a good conversation.

While Wise only has been around Miles and his coaching staff here and there for the past few days, in the midst of the team’s spring practice schedule, he thought what he witnessed was promising.

He’s so excited, in fact, that Wise said he’s going to see if he can make it back to town April 13 for KU’s spring game, which is now called Late Night Under the Lights.

After KU’s pro day on Wednesday, Sims said it felt a little strange to be back on campus after spending the past several months in his hometown of Houston.

The program’s leading receiver each of the previous three seasons, Sims felt unexpectedly out of place this past Saturday while watching KU’s scrimmage from the sideline.

“It’s just different not being able to show the guys what we’re talking about,” Sims said, explaining he is used to interacting with the receivers and showing them technique and footwork on a route. “When I’m actually lining up and showing them my thought process on it and what I’m doing, how I’m thinking about how to beat that, it’s different. I miss it. I miss those guys.”

“He looks like he’s got some go,” Sims said of Andrew Parchment, a 6-foot-2, 185-pound junior who transferred to KU from Iowa Central Community College. “He’s got a little he needs to clean up as far as technique and route running. But straight line, nobody’s going to keep up with him.”

But it was a receiver wearing another number that Sims was sure to seek out, in order to offer some advice.

“I told him he’s got to hold it down with that number 11,” Sims said of his message to Ezra Naylor. “He’s got to. I did some good work in that 11.You’ve just got to live up to the 11, try to make it the new number around here.”

Dineen got to spend a little more time with Miles than his teammates, as he sat with the popular football coach during a KU basketball game this past December.

“He’s a good guy for sure. And I think he’s a hell of a football coach,” Dineen said recently. “And just from what I’ve heard, just kind of the buzz around from my brother (Jay Dineen, a redshirt sophomore linebacker) on the team and stuff like that is he’s running a tight ship. I’m really excited to see how they progress in the spring, and then obviously into the fall.”

Dineen described the direction of the program as “going up and up,” and said he was glad Miles retained assistant coaches Clint Bowen and Tony Hull.

“From what I hear the coaches that they hired are pretty damn good,” Dineen added of the rest of Miles’ staff. “I think they’ll be good.”

Asked to predict a breakout performer for KU’s defense in 2019, Dineen kept his answer close to home, replying “43,” as in his brother, Jay.

“I think he’s actually going to do really well,” Joe said. “I’ve just heard from other people that he’s been having a good offseason. Obviously he’s a hard worker and stuff, and he’s a really good football player. So I’m excited to see what he can do.”