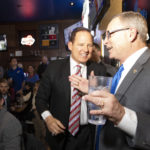 Kansas football coach Les Miles won’t be able to talk on the record about any of his staff’s Class of 2020 recruits until those players officially become part of the program by signing National Letters of Intent.

However, Miles was able to speak far more generally on the subject of KU’s recent recruiting success during a “Hawks & Highways” tour stop earlier this week in Wichita.

Miles explained to KAKE TV why he thinks the future of the program is looking promising.

“The people that are representing Kansas are doing so with a serving manner,” Miles said, “and there’s a group of people there that really want to represent the school, the people, certainly the football team well.”

As of Thursday, Rivals ranked KU’s 2020 recruiting class 20th in the nation and second in the Big 12, trailing only Oklahoma.

With 21 rising high school seniors currently committed to KU, the Jayhawks have the third-most pledges in place among all FBS teams, according to Rivals. KU is tied for third with Minnesota and Ole Miss at the moment in that category. Only Navy’s 33-player class and Army’s 25-player class include more recruits.

KU Athletic Director Jeff Long also attended the Wichita event with Miles, and told KAKE that the man he hired to take over the struggling football program already has displayed success on the recruiting front because Miles possesses the organization skills and commitment to detail to make that possible.

“I knew it would make an impact in recruiting. I’ve got to be honest, though, it’s made a bigger impact than I thought this early, so we’re really excited,” Long added. “It’s going to take a little bit of time to build this thing, but, boy, are we off to a great start, and I’m really excited about the future.”

While all verbal commitments are nonbinding, KU’s 2020 class currently is powered by the presence of 15 three-star prospects, who hail from Alabama, Missouri, Kansas, Iowa, Oklahoma, Louisiana, Michigan and Texas.

While it seems expectations within the college football universe are low for Kansas this coming season, some experts are more optimistic about Miles’ Year 1 chances than others.

At SI.com, some of Sports Illustrated’s college football writers teamed up to answer some broad questions about the 2019 season. A couple of those queries led to responses regarding Miles and KU.

The first was: Which first-year coach is in the best position to make an impact in year one?

SI’s Laken Litman chose Miles for her response, while pointing out that “it won’t be easy,” but the only way to go for this program and its new head coach is up.

“Miles, who won two SEC championships and a national title at LSU, faces a new challenge here,” Litman wrote. “The Jayhawks went (6-42) with just two Big 12 wins over the last three seasons under David Beaty, and really, all Miles needs to do to make an immediate impact is be better than that. Win a handful of games (KU won three last year, with just one Big 12 win), have success on the recruiting trail and prove that it is possible to build a football program in Lawrence.”

The SI staff also answered another coach adjusting to his new home question: Which first-year coach faces the toughest job in year one, whether because he has a massive turnaround on his hands or because the program standards have risen to a point where regression is almost a given?

Scooby Axson went with Miles for his answer.

“Look no further than Lawrence, Kansas, to find the reemergence of 65-year-old Les Miles at one of the FBS’s toughest jobs,” Axson wrote. “LSU parted ways with the Mad Hatter for failing to beat Alabama with NFL-caliber talent on the roster each season, but no such expectations will be placed on Miles in trying to revive a program that has not won more than five games in a season since 2008. The talent deficiency compared to the rest of the high-flying Big 12 will be too much to overcome as the Jayhawks search for any meaningful progress in year one.”

Other responses were Geoff Collins at Georgia Tech, Mike Locksley at Maryland and Brown at UNC.

Per KU’s release, fans who use the service will have their reserved tailgating sites set up and broken down by Tailgate Guys staff. Plus, fans can be transported from their parking spots to the tailgating area, and Tailgate Guys provides tents, tables and chairs for the setup. Additional options such as satellite TV access also are available.

“Tailgating is integral to college football and creating a dynamic and family-friendly gameday experience,” Chris Freet, KU’s deputy athletic director for external engagement, said in a release. “There is a great history of tailgating on Campanile Hill, but in recent history it has been almost exclusively for large groups and corporate outings. We are excited to bring back tailgating offerings to small groups of family and friends in the most picturesque location on campus.”

Tailgate packages will be available to KU fans beginning on July 8. Those interested in reserving a package can call 785-727-4122 or visit the Tailgate Guys’ website at tailgateguys.com.