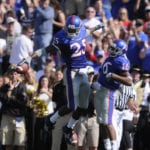 Former Kansas football standout Darrell Stuckey will be coaching up youth athletes in his hometown of Kansas City, Kan., on Saturday, when the one-time San Diego Charger pro bowler will head up what’s being touted as Dotte Football Camp.

“I am hosting a free camp solely because I love this game and want to share my passion with the youth of my community,” Stuckey said in a release. “I want athletes to walk away with something they can take back to their own teams.  I did not have opportunities like this during my developmental years and I want to give back and show kids that through hard work, all things are possible.”

Stuckey’s camp, which will take place at Bishop Ward High, is a USA Football Fundamentals clinic.

Those interested in participating can register online at DarrellStuckey.com. Registration also will be open at Bishop Ward beginning at 8 a.m. on Saturday.

The session is designed to introduce children to football by teaching them some basics of the game.

“As a young player you can never have too many fundamental skills,” Stuckey said, “so we will focus on fundamentals as well as advanced football drills.”

Stuckey, a fourth-round pick of the Chargers in 2010, played seven seasons in the NFL and was a special teams captain with the organization for five years. He made the Pro Bowl in 2014.