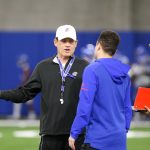 Kansas head coach Les Miles talks with members of his staff during football practice on Wednesday, March 6, 2019 within the new indoor practice facility.

While discussing recently how much he is enjoying his return to college football, University of Kansas head coach Les Miles brought up the endeavors that are keeping him most busy at this point of the year.

“You should see how we recruit. We recruit like we make a game plan,” Miles said. “And the effort that you put into recruiting gives you the likelihood that that man is going to come play for you at Kansas.”

The approach implemented by Miles and his staff must be doing the trick, given the success of this past weekend, when eight new prospects verbally committed to KU’s 2020 recruiting class.

That influx of high school talent shot Kansas up the team recruiting rankings at Rivals. By Monday, the Jayhawks’ class ranked 22nd nationally and second in the Big 12 — trailing only Oklahoma — according to Rivals.

With 20 verbal pledges from recruits in place (19 on Rivals’ list, which doesn’t include the commitment of unrated Oklahoma prep Kyler Pearson, a possible walk-on), Kansas leads the Big 12 in that category and is tied for sixth in the nation, per Rivals’ numbers.

And it’s the volume of commitments that has KU’s class looking so promising in those rankings. The more prospects a team can claim who have been graded with three stars or more, the better a given team’s recruiting ranking looks — especially at this time of year, with still months to go until the early December signing period.

Six Big 12 programs, for example, have at least one four-star prospect committed, while KU currently has none. Yet the Jayhawks stand in second place in the Big 12, thanks to their 14 three-star commitments — Kansas City, Kan., recruit Jaylin Richardson has been bumped up from two stars to three, per Rivals.

Programs are awarded more points in the rankings for the presence of four- and five-star recruits. That’s how Oklahoma, with 12 commitments, is ranked first at this point.

With so much time left before the signing classes become final in February, is it realistic to think Kansas can maintain such a high ranking in the Big 12 or nationally?

“There’s going to be a couple of schools that are going to end up catching up and getting some recruits,” said Rivals’ KU football recruiting expert, Jon Kirby of Jayhawk Slant, “and Kansas will have to contend with that from a rankings standpoint. But you also have to remember: Kansas isn’t done either.”

Assuming Miles and his staff plan on offering 25 scholarships, which is the NCAA yearly maximum, there are still six open spots to fill. So if KU’s current coaches are able to land some four-star talents (or better), too, the class as a whole would theoretically be able to maintain an uncharacteristically high recruiting ranking.

If that doesn’t happen, though, KU will drop spots in the rankings in the months ahead, particularly as other programs line up more four- and five-star recruits.

Using the average rating of 2020 commitments, KU currently ranks seventh in the Big 12, with a 2.74 score.

Looking at Rivals’ national rankings and applying the average score instead of the total, KU’s 2.74 drops the team from 21st to 53rd.

Still, considering the lowly depths experienced by the program over the course of the past decade, the fact that Miles and his assistants have so many commitments in place by late June qualifies as a sign of progress.

“Sometimes with the big-time programs you see it a lot more often,” Kirby said of KU’s high total at this time of year. “Usually you don’t with Kansas, just because a lot of times, I always joke, a lot of schools get to eat before Kansas does. And that doesn’t mean you can’t find good recruits late. But in the past Kansas always seemed like they’d find a lot of their recruits in December and January, whereas everything’s sped up now. You’ve got this early signing day and now you can take official visits earlier than you used to.”

According to Kirby, KU’s lengthy list of commitments at this stage signals that the staff’s recruiting efforts have been prosperous.

“It tells you more than just a number. It tells you the recruits are buying in and the relationships that the coaches are building, the recruits and their parents are seeing that, because to have (20) commitments at Kansas (the summer before a signing period) has never been done,” Kirby pointed out. “I think it shows you that they’re also getting kids they want, because you don’t get kids in June unless you really wanted them early.”

This month alone, KU added 15 commitments. All verbal pledges are nonbinding. The earliest any of KU’s 2020 recruits can sign and make their ties to the program official is December.