Les Miles glad to have 19 signees in place in December 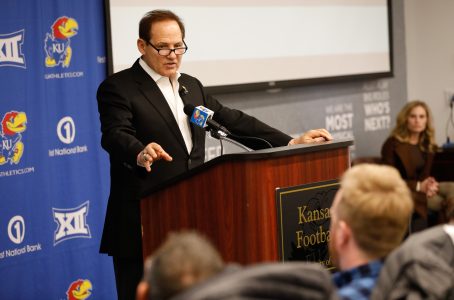 Out of coaching when the NCAA first allowed college football staffs to make use of an early December signing period, Kansas head coach Les Miles got just a taste of the process a year ago, in a hurried fashion, with only a few weeks between the time of his hiring and the three-day window to try and line up recruits.

With the class of 2020, Miles got to fully appreciate the format, describing it as advantageous.

The amount of players signed in December can vary greatly from program to program, even in the Big 12. Miles and his KU staff announced 19 signings this past week, leaving the coaches some wiggle room but also work to be done, as NCAA rules permit each program to sign and add a maximum of 25 scholarship players per recruiting class.

Miles didn’t provide an exact figure when asked this past week if he thinks there is an ideal number of signings to make during the early period. But he indicated his preference for having as many of the targets as possible officially on board.

“I’d like to have exactly who I wanted in December, every December, first of all,” Miles said. “But if there’s an offensive tackle that’s not necessarily signed, he’s looking for a spot where they can get a great education and an opportunity at being coached by all our coaches, et cetera, then we’ll certainly entertain that second (signing period).”

KU’s head coach went on to say he likes knowing where the program stands with most of its signing class in December instead of having to wait until February to make everything official.

With 19 class of 2020 players officially signed and six more at least verbally committed, the Jayhawks, as of Monday, ranked 37th nationally and fourth in the Big 12 according to Rivals’ recruiting rankings.

It’s important to note, though, that KU is benefitting from the presence of 25 prospects in its class, giving the Jayhawks more cracks at adding to their points total in Rivals’ formula. Kansas currently has four more recruits in its class than Iowa State, 10 more than TCU, six more than Oklahoma State, five more than Texas Tech and 10 more than Baylor.

Looking around the league at the average star rankings of each team’s recruits, KU comes in ninth, at 2.8, ahead of only Kansas State (2.75). Compared to the rest of the FBS teams’ average star rankings, per Rivals, KU ranks 60th. Only six Power Five teams are lower: Rutgers, K-State, Virginia Tech, Syracuse, Vanderbilt and Wake Forest.