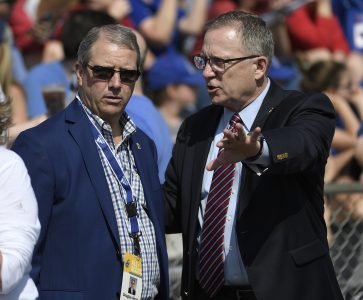 In evaluating the first season of the Les Miles era at the University of Kansas, the man who hired Miles, Athletic Director Jeff Long, hesitated to call the 2019 season an outright success.

And even though Long might be openly overzealous with his verbalized expectations that KU win every game, he described the just completed 3-9 year as a step in the right direction.

“I think we saw improvement,” Long replied Thursday, when asked during an interview session with reporters how KU’s win-loss record measured up to his expectations. “We only saw three wins. I think we saw other games that, wow, we competed in. You look at the Texas game, I mean we were one minute and 10 seconds away from a victory there, and that that would have been huge for our program. But we’re closer. We’re far closer than we have been.”

Long hired Miles in November of 2018 to replace David Beaty as KU’s head coach. When Miles officially returned to the sidelines this fall, it marked his first time coaching in a college game since 2016, when LSU fired him four games into the season.

Speaking with reporters for the first time since KU’s season came to a close this past Saturday, Long offered his evaluation of the job Miles has done.

Long said Miles “did what he does” in the past year, calling the football program’s leader “a player’s coach” who “develops young people.”

Long thinks Miles is an “excellent” recruiter and added he thinks people will see that play out in the weeks ahead.

“So I think we’re getting the experienced, national championship-winning coach that we expected to get,” Long said. “It’s a tough bill, and we’ve made strides. So do I wish we were further along? Yes. Am I disappointed with where we are? No. I think we’ve taken the first step.”

KU, of course, has won three or fewer games for 10 consecutive years. Long spent a portion of his media appearance offering his thanks to fans, who have “had a decade of football that has not been the best.”

Long emphasized that he and the athletic department as a whole are “not satisfied” with three victories.

A part of that, Long noted, involves the work Miles and his assistants are in the midst of now, recruiting players for 2020 and beyond.

“We’ve got to recruit our way out of the situation we’re in,” Long said, “and I think we’re making a good start on that.”

As of Thursday, less than two weeks from college football’s December early signing period, KU has 24 non-binding verbal commitments in place for the class of 2020. Rivals currently ranks KU’s class 30th in the country and third in the Big 12 — though KU has more commitments than any other program in the conference at this point, helping the Jayhawks in that cause. Meanwhile, 247Sports has KU’s 2020 group of recruits ranked 40th nationally and fifth in the Big 12.

Despite those positive factors he referenced, Long said he wouldn’t consider this year successful, “because we didn’t win every game.”

He reiterated his stance that 2019 was a “positive” step forward for the program.

“And we’re getting better,” Long said.

During his opening remarks with media members on Thursday inside Allen Fieldhouse, Long noted KU football attendance dwindled through the years, before numbers improved during Miles’ first year as head coach.

“They came back this year, and they came back in a big way,” Long said, pointing out attendance increased by 74.3% from the previous year. “When we have more success, we expect to have more fans.”

As Long pointed out, KU football enjoyed its best season attendance total since 2013, when 265,187 people came out for seven home games.

Long said he was encouraged by the sellout (47,233) for KU’s home rivalry matchup with Kansas State this year, as well.

Asked what he made of KU’s season finale, when only 22,531 showed up to watch the Jayhawks’ Senior Day versus Baylor, Long argued that playing during the Thanksgiving holiday weekend influenced that number, but he also referenced other factors in the significant dip.

“And it has an impact when your team’s not highly successful,” Long said. “If you look across the country, those last Thanksgiving weekends, if your team’s not in competition for the championship or if it’s not a rivalry game that draws people and attracts people, you have challenges. But, again, I think if you look at the entire season you look at the fans and the way they came back, we’re very pleased with the impact that we’ve made in reaching out to our fan base and them coming back to support.”

Long thanked KU students for their assistance on that front and said about 3,000 students per game were in the bleachers for home games.

“And that was three times what we did a year ago and double what we did the year before that,” Long added.

Giving an update Thursday, Long said the goal was to raise $25 million over a five-year period, and he reported the athletic department already has surpassed $16 million toward that cause before the end of the campaign’s second year.

At this point, Long said KU is working with the architectural firm Populous to determine what the renovated venue “could and should” look like. He also said the athletic department is at the beginning of developing the financing plans for that project.

“But it depends on success in the program and the interest in our major supporters to contributing to that stadium build,” Long said. “It is a needed project, but it’s one that needs to be strategically timed for and executed.”

Now that all 18 episodes of the ESPN+ streaming series “Miles to Go” have been made available online, Long was asked whether more might be in the works for the future.

Long said no such discussions have taken place at this point.

KU’s AD noted he was informed that during the time span from which the behind the scenes show began airing, it has been the third-most viewed series on ESPN+.