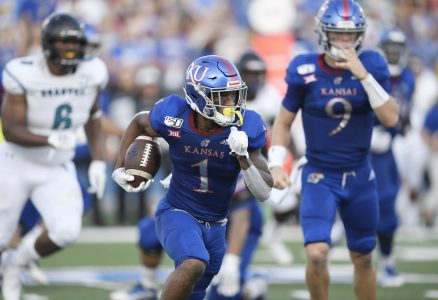 The last-place Kansas football team only won one conference game this season, but the league’s head coaches voted two Jayhawks onto the 2019 All-Big 12 first team.

Both sophomore running back Pooka Williams and senior left tackle Hakeem Adeniji, the conference announced Wednesday, were deemed among the best offensive players in the Big 12 this season.

Adeniji started all 48 games of his just completed KU career. The Garland, Texas, native and team captain was a fixture up front for the Jayhawks (3-9 overall, 1-8 Big 12), as the offense averaged 377.3 yards per game.

Williams rushed for 100 or more yards five times as a sophomore, and also had a 99-yard outing among his 11 games played. The dynamic back finished with 1,061 rushing yards, 214 receiving yards and five total TDs, and averaged 5.2 yards per carry. He was one of two running backs on the Big 12’s first team, joining Oklahoma State’s Chuba Hubbard, who was named the Offensive Player of the Year.