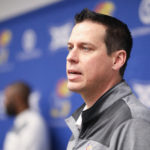 Now that D.J. Eliot has 15 spring practices and two-plus weeks of preseason camp behind him, Eliot is much more familiar with the defensive personnel on the Kansas football roster than he was when he agreed to become the defensive coordinator for head coach Les Miles.

While Eliot didn’t want to be overly forthcoming when it came to discussing the potential and strengths of the Jayhawks’ 3-4 defense, preferring to keep upcoming opponents out of the loop, the former D.C. at Colorado and Kentucky didn’t mind sharing some details about players who have impressed him during practices the past few weeks.

Asked to identify some defensive standouts from KU’s closed practices, the coordinator and outside linebackers coach began in the secondary.

“He can make a lot of plays,” Eliot added of the 6-foot-4, 235-pound edge rusher. “He’s extremely talented for that outside linebacker position.”

Sticking with the front, Eliot also highlighted the tallest player on the defense, 6-7, 294-pound senior Darrius Moragne. Eliot said the large D-end has “at times” done “some good things” for KU.

“There’s another group of guys, too,” Eliot added. “But those are some off the top of my head.”

Considering Eliot’s relatively short list of players who have caught his attention for the right reasons during camp, it may come as a surprise that he brought up a defensive lineman at all.

From a production standpoint, KU’s defense returns very little on the D-line. No starters are back from 2018 in that position group, and the leading returning tackler is Codey Cole III, who recorded eight total stops.

However, Eliot wasn’t ready to outwardly agree with the notion that KU’s D-line might be the biggest unknown for his group entering the season.

“I’m proud of the efforts of both groups,” Eliot said. “The new guys and the older guys. They really gelled together well and had a good camp.”

Although in the spring KU listed some players on its roster as playing the “Hawk” position in Eliot’s scheme, that is no longer the case.

Introduced initially as a hybrid type of position for outside linebacker and defensive end types, such as Kamara, Najee Stevens-McKenzie and Kyron Johnson, the “Hawk,” within a certain play call, Eliot explained, could be a variety of players, depending on the scheme.

Ultimately, Eliot called the position “an athletic outside linebacker” who can be put in position to make plays in space or rush the passer. At this point, Torneden could end up taking on that role this year as much as anyone.

“Bryce is one of them, and he’s played that throughout training camp,” Eliot shared. “It’s just a position within our system. It’s an outside linebacker that’s great as a rusher and in space.”

Although Kamara used to be labeled as a “Hawk” on the roster, he now is listed at linebacker and plays the “Jack” position — essentially a standing D-end who can rush or drop into coverage.