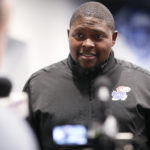 During his eight seasons as a college football coach, Kansas defensive line coach Kwahn Drake has become a bit of an expert at starting over.

Now with his fifth program in the past five seasons, Drake has developed a specific process for introducing himself to his new players and he brought it with him to KU.

His routine introductions are short and sweet and can be summed in seven simple words — define the why and remind the why.

That concept also cuts to the core of exactly what Drake wants to do with the young men he coaches — get to know them as quickly as possible and build the relationship from there.

Asked where he learned the trick and if he picked it up from a former boss or colleague, Drake shrugged.

Drake said connecting with his players on a level that goes beyond their assignments on the field or film study in the classroom helps build both a trust and a bond that can help all parties involved achieve their goals.

While the upcoming season will bring Drake his fifth stadium and sideline in the past five years, it won’t be an entirely new experience for the 32-year-old New Orleans native who spent three seasons coaching high school football in Louisiana before making the jump to the college ranks.

After four years at Tulane (2012-15), one year at Memphis (2016) and another at Eastern Illinois (2017), Drake landed in Boulder, Colo., where he worked under then-Colorado defensive coordinator D.J. Eliot a season ago.

After former CU coach Mike MacIntyre was fired before the final game of the 2018 season, both Drake and Eliot found themselves looking for work and that led them to Kansas, where they were hired to be a part of Les Miles’ first staff at KU.

“Kwahn is one of the best assistant coaches I’ve ever been around,” Eliot said in a news release announcing Drake’s hiring. “He has an unbelievable way of getting the best out of his players and he is an incredible recruiter.”

Drake’s “define the why and remind the why,” process plays a key role in both of those goals.

“Usually guys have a why,” Drake said. “It’s just bringing it out of them and understanding that every day there’s a reason you’re doing what you’re doing, now let’s keep going.”

While the system has served him best in the early stages of any of his new jobs, Drake said the defining and reminding is not limited to the first few encounters with his players.

“It’s a process that goes on over the season,” he said. “Those guys need to understand what they really want and what it takes for them to get there. … I believe that guys have it, it’s just bringing it out.”

Drake’s efforts also are not a case of him simply following the same blueprint for every player who lines up in front of him or visits him in his office.

“I like to say that I treat everyone equally different,” he said. “You have to find what makes each young man tick.”

Drake and the Jayhawks are currently in the middle of their first preseason camp under Miles and are now less than three weeks away from the 2019 season opener, slated for 11 a.m. on Aug. 31 against Indiana State at David Booth Kansas Memorial Stadium.