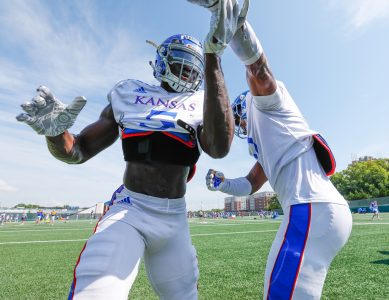 When Azur Kamara joined the Kansas football program a little more than a year ago as a junior college transfer, he hoped his pass rushing skills would translate quickly to the Power Five level and turn him into a playmaker up front for the Jayhawks’ defense.

Even though KU’s need for a disruptive force on the edge meant Kamara got to play in all 12 games and even start three as a junior, the chiseled, 6-foot-4 newcomer didn’t quite explode onto the scene.

In his first season at KU, Kamara made 16 total tackles, five tackles for loss, one sack and was credited with a pass breakup and one quarterback hurry, too. But it proved a little difficult recently for him to pinpoint the biggest moment of his junior season. Eventually, Kamara settled on the 2018 finale versus Texas, a game in which he made two tackles, but, more importantly to him, got to play in front of his family.

“This year, though, I’m going to have a lot more,” Kamara said of his expectations to deliver memorable performances as a senior.

Recruited to KU by the previous coaching staff as a defensive end out of Arizona Western College, Kamara was rated by Rivals as a three-star juco prospect and reportedly picked up scholarship offers from programs such as Florida State, Nebraska, Oregon, Arizona, Arizona State and others.

Now playing for a new staff, headed by Les Miles, Kamara is listed as a linebacker on KU’s roster. But his official position in defensive coordinator D.J. Eliot’s scheme is called a “Jack.”

“My main thing on the defense is to set the edge and rush the passer. That’s all I do,” said Kamara, who described his spot up front as a defensive end who stands up near the line of scrimmage instead of bending over and getting into a stance before the offense snaps the ball.

Of course, rushing the passer isn’t the only thing Kamara is asked to do from the edge. Much of his individual progress this past offseason, as he worked toward playing a much larger role for KU in 2019, came in the way he adapted. He couldn’t only be a player who tries to race after the QB and expect to earn a starting spot.

“The challenging thing for me was learning my pass coverages. I’m starting to get that now because Coach Eliot’s done a great job helping me understand the schemes,” Kamara said. “From spring to now I’ve learned a lot more.”

According to Kamara, that piece of the puzzle came by spending more time on his own studying the defensive playbook and watching extra game and practice footage. Plus, he didn’t consider those coverage assignments too complex to grasp because he played some outside linebacker at Arizona Western, too.

“The only thing was now I’m dropping a lot more than I used to,” Kamara shared. “I’m getting used to that, though.”

As he aims to add to his personal repertoire, Kamara also thinks he is continuing to grow as a pass rusher, too. At KU practices this preseason, his daily battles with senior left tackle Hakeem Adeniji forced him to improve.

“He’s making me better,” Kamara said of Adeniji, “and he’s gotten a lot better, too.”

Now 235 pounds and looking forward to proving he can be an impactful part of KU’s defense, Kamara’s work since the end of his first season at the FBS level already has helped him impress his head coach.