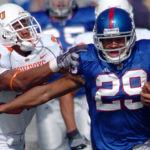 KU's #29 Jon Cornish tries to escape the hands of O-State's 30 Grant Jones in the 1st half of action against the Cowboys in this file photo from 2006.

As productive as he was during his days with the Kansas football program, running back Jon Cornish will be remembered most for what is now officially a hall of fame Canadian Football League career.

“This is my crowning achievement,” he told the Calgary Sun.

After rushing for 1,457 yards — still the all-time best single-season mark in KU history — and eight touchdowns in his final season with the Jayhawks in 2006, the New Westminster, British Columbia native returned north of the U.S. border, where he soon became one of the CFL’s premier running backs with the Calgary Stampeders.

By the time he decided to retire, following the 2015 season, Cornish left the game as a three-time winner of the CFL’s Most Outstanding Canadian award, as well as the recipient of the Most Outstanding Player award in 2013, when he accumulated 2,157 total yards of offense (1,813 rushing) and 14 total touchdowns.

During his nine-year run with the Stampeders, the franchise won the Grey Cup twice, in 2008 (before Cornish became the team’s featured back) and 2014.

“There’s nothing really else for a football player to get,” Cornish told the Calgary Sun of his impending status as a hall of famer.  “So for me, I could not be more honored to with this greatest recognition of my life.”

Per the Sun, Cornish finished with 6,844 career rushing yards and 44 touchdowns. He averaged 6.7 yards per carry during his nine seasons in the CFL, while appearing in 140 regular season games, all with Calgary.

At KU, Cornish played for Mark Mangino from 2003-06. As a redshirt junior in 2005, Cornish helped the Jayhawks reach the Fort Worth Bowl, and he ran for 101 yards and caught two touchdown passes in a 42-13 Kansas victory over Houston.

As a senior Cornish racked up eight 100-yard rushing games, which is tied for the most by a KU running back in one season with Tony Sands (1991).

Cornish’s successes at both the collegiate and professional levels led to an award being established in his name recently. The Jon Cornish Trophy is presented to the top Canadian in NCAA football. Ohio quarterback Nathan Rourke became the first player to earn the Cornish trophy following the 2017 season and Rourke repeated the feat this past year.