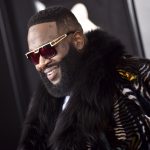 The fans sitting in the bleachers at David Booth Kansas Memorial Stadium on April 13 will get to take in more than a football scrimmage.

Though head coach Les Miles may have gotten ahead of himself a little over a week ago when telling a group of media members that rapper Rick Ross would be at the football team’s spring game, KU officially announced the performance on Friday.

The Jayhawks publicized the news in video form through the team’s various social media accounts. And that platform allowed KU’s head coach to display some of his acting skills.

“Hey, Rick. Mad Hatter here,” Miles says in the video. “Yeah, we need you up here in Kansas. We’re doing your gig. I told everybody that you were coming. Now you can’t let me down. You coming?”

At that point, some edited Ross audio is spliced in for the theatrics, so Miles can react to Ross confirming the appearance.

The bit concludes with a “boom,” from Miles, who drops his phone in his staged moment of triumph, which is followed by a celebratory dance, backed by a clip of the Meek Mill track, “I’m a Boss,” on which Ross appears.

It’s officially OFFICIAL. @RickRoss will be performing at Late Night Under the Lights pic.twitter.com/Qpqs8td9RL