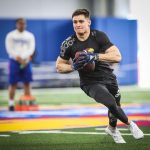 Former Kansas receiver Ryan Schadler sprints up the field after pulling in a pass during Pro Day on Wednesday, March 27, 2019 at the Kansas Football Indoor Practice Facility.

If sometime in the future Ryan Schadler is able to carve out a spot for himself on an NFL roster, he’ll have to make it happen the hard way.

Of course, his already difficult path to this point in his football life could actually end up helping the former University of Kansas receiver achieve his professional goals.

Ahead of his senior season at KU, the Hesston native and one-time Wichita State track athlete aspired to have a larger offensive role than the one he would end up playing.

As a junior in 2017, Schadler caught 21 passes for 181 yards. But as a senior, Schadler never became a part of the passing game and went without a catch in 2018.

Most of his appearances during his final collegiate season came on special teams, and the majority of that time was spent not as a returner, but a gunner.

In the months since his KU career concluded, however, Schadler has discovered that time invested as a specialist is paying off. In fact, he hopes it will help him get his cleats in the door at the NFL level.

“Especially if you’re an undrafted free agent, you don’t go in and start,” Schadler told the Journal-World during a phone interview on Friday, after he and several other former KU players took part in the Kansas City Chiefs’ local pro day. “You have to play special teams. That’s where my background helps a lot.”

The 5-foot-10, 184-pound prospect appeared in 36 games over the course of three seasons with the Jayhawks, and finished with 128 rushing yards, 181 receiving yards, 1,336 return yards and two touchdowns.

It was grunt work that dominated his senior season as a special teams gunner, though.

“That’s what I did. I have good film with doing everything — catching, running, kick-returning, obviously — but there’s a lot from my senior year, because that was a lot of my playing time, was being a gunner,” Schadler said. “That opened me even more as a player, as a special teams player, getting better at the technique and tackling.”

With a fresh perspective, and always hopeful about his future, Schadler now views even the most grueling part of his college football experience as a bonus.

“What seems like a tough situation, not getting as much time, ended up helping me a lot,” Schadler said.

It was January when Schadler first heard about the Chiefs’ local pro day from one of the team’s scouts. Schadler was in Daytona Beach, Fla., for the Spiral Tropical Bowl showcase and he had “showed out” in one-on-one drills before taking home the event’s Overall Special Teams MVP award. The scout with whom Schadler spoke at the time told him he liked what he saw both in person as well as on video, in footage from Schadler’s time with KU.

Outside of that trip southeast, Schadler spent the majority of his free time from mid-December through late March working out in Salina, with the help of former KU running back Jake Sharp. He credited all that training for setting him up for what he deemed a very successful KU pro day on March 27, when he ran a 4.49 40-yard dash and had the best posted times in the 3-cone drill (6.94 seconds) and 5-10-5 shuttle (4.2 seconds), while firing off 23 reps on the 225-pound bench press.

A little more than a week later, Schadler and other prospects from KU, Missouri, Kansas State and other programs were at the Chiefs’ practice facility for the local pro day. Schadler said he was one of a handful receivers at the event, and at that position the group was asked to do a lot of individual work before finishing up the hour-long segment for offense by running routes.

Ultimately, Schadler’s goal is to catch on with an NFL team and work his way into a role as a slot receiver.

“I was talking with a lot of the Chiefs’ guys today, and I mean, yeah, that’s great,” Schadler said of being a special teams gunner. “I’d love to do that too, but my route-running and my ability in the slot is great, too, and I think I’ve shown that.”

Dating back to his trip to the Tropical Bowl, Schadler said he has been contacted by several CFL teams who are interested in bringing him north of the border, but for now he’s considering that his “backup option,” while he counts down the days to the NFL Draft (April 25-27), and the flurry of undrafted rookie deals and invites that always follow that event.

In the meantime, Schadler is working out in Lawrence with former KU standout Darrell Stuckey, a pro-bowler in his 2014 season with the Chargers.

“Being such a big special teams guy and likely that being my niche in the league I’ve got to soak up every minute,” Schadler said of picking Stuckey’s brain. “He’s helped a lot. Obviously he doesn’t play slot receiver, but as far as being a gunner and everything it’s been good to learn from him.”

Still recovering from a hamstring injury he suffered during KU’s pro day the previous week, Dineen told the Journal-World he didn’t participate in drills with the Chiefs. However, the team had the former standout KU linebacker and a few other prospects stick around after workouts for physicals.

Former Oklahoma defensive end Amani Bledsoe, a graduate of Lawrence High, also worked out for the Chiefs on Friday, receiving praise from Dineen for his showing during the defensive session.