After leading the Bulldogs to a 8-5-2 record in the regular season, Drew Ising had his team ready for the postseason, and BHS played some of its best soccer of the season late. Before falling to eventual state champion Bishop Miege in the quarterfinals, Baldwin rolled to two regional victories by the combined score of 9-0 to reach the Class 1A-4A state tournament. BHS finished the season with a 10-6-2 record.

The senior captain was a do-it-all type of player for the Bulldogs during the 2022 season. Riley Smith scored 11 goals and recorded 12 assists while moving between positions throughout the midfield and attacking spots. She was often the focal point of opposing defenses and faced several double-teams throughout the season. Smith’s assist total was the second most for a single season in BHS history. The all-league and all-state performer finished her career second all-time in assists and in the top 10 in goals scored.

A sophomore multisport athlete who delivered strong seasons throughout the school year, Fisayo Afonja led the Bulldogs with 15 goals and was tied for third on the team with four assists. She used her combination of speed and strength to create scoring chances for herself and others, and six of her 15 goals were game winners. She also earned first-team all-league honors.

Sophomore defender Nora Prather was called by her coach “the heart of our defense,” not only for her ability to stand up to opposing offenses but also her intelligence and ability to read and react to plays quickly. Known as a great leader, she kept the entire team organized and often used her defense to help BHS quickly transition to offense.

A captain for the Chieftains in 2022, Eva Romero scored three goals and recorded two assists while earning an honorable mention all-league nod. The senior played in the center of the THS midfield and worked tirelessly to get her teammates open and create opportunities for others. 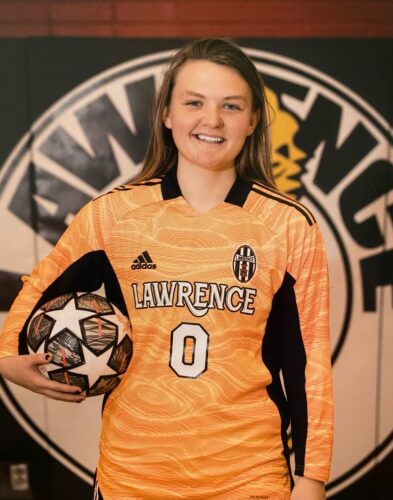 It was a rough season for the Lions in the win-loss column, but Cree Stewart showed throughout that she was willing to battle anyone, any time, anywhere. The junior goalkeeper recorded more than 350 saves and was praised by her coach for her leadership and emphasis on being a great teammate throughout the season.

Bella Carter played in both the midfield and as a defender for the Lions in 2022 and finished the season by earning a letter for the fourth time in her LHS career. She earned a scholarship to play college soccer and will head to Westminster College in Fulton, Missouri next season.

A standout Firebird for four seasons, senior midfielder Madi Beely was one of the leaders for Free State during the 2022 season. She was praised by her coach for her toughness and leadership style and earned the respect of her team for her willingness to go to battle no matter what the scoreboard showed. Beely will continue her soccer career at Missouri Southern State University.

A team captain in 2022, Aspen Wilson led the Firebirds in goals scored and versatility. Willing and able to play wherever her team needed, her ability to read plays quickly helped create several scoring opportunities for the Firebirds in the ultra-tough Sunflower League.

Jayla Erpelding, an EHS sophomore, showed in 2022 that she can play a variety of positions and roles for the Cardinals and that her impact was equally as high no matter where she was on the field. One of the team’s top free kick weapons, Erpelding used her pinpoint precision to bring some pop to the EHS offense. She was particularly effective in the midfield, where her physicality and tenacity often paid off. Erpelding was a first-team all-Frontier League selection this season.

As the Cardinals’ last line of defense at the center back position, Mallory Vickers showed throughout the season that she was up to the task of playing such an important role. She used her aggressive mindset and high soccer IQ to turn away several scoring chances by EHS opponents and also operated as the quarterback of the team from her position on the backline. Vickers, a senior, also earned second-team all-Frontier League honors this season.

Playing goalkeeper for the first time, junior Kambry Shockley was known for being extremely coachable throughout her time in the new position. She recorded 104 saves and gave up 27 goals in 16 games this season. Those numbers included one game in which she recorded 20 saves. Shockley has the right blend of intelligence and aggressiveness and she also earned second team all-Frontier League honors this season.

Coach of the Year: Drew Ising, Baldwin High After leading the Bulldogs to a 8-5-2 record in the regular ...

Coach of the Year: Bill Finucane, Eudora High Armed with a tremendous amount of talent and experience, Bill ...