Free State basketball coach Sam Stroh and Michael Jordan pose for a photograph at an event in New York City in August of 2012.

The first four episodes of “The Last Dance” documentary on Michael Jordan and the Chicago Bulls have brought back dozens of childhood memories for Free State boys basketball coach Sam Stroh.

But none of them quite stack up to the night he met his idol at a fundraiser in New York City.

Eight years ago this August, Stroh’s decision to throw a $15 donation at an online lottery for dinner with Jordan and Barack Obama led to what he described as “a first-class weekend” for him and his wife, Molly.

The first step in the process that led to Stroh playing a game of HORSE in Jordan’s presence at the “Obama Classic” was his decision to respond to a tweet sent out by the former president.

“Dinner with Michael Jordan and President Obama – Make it happen,” the tweet read.

So Stroh did. He clicked the link. He pledged $15. And he received two phone calls that paved the way for the night of his life.

The first call came shortly after he signed up and was from a woman who asked him to share the talking points he would discuss with Jordan and Obama if he got the opportunity to join them for dinner.

“I had to kind of think on my feet because I wasn’t expecting a phone call,” Stroh said.

After sharing his story, which included talk about the Jordan posters, shoes and collectibles that littered his room growing up, Stroh, then a coach at Blue Valley North, got to the heart of his message.

“I talked about just wanting to thank him for being a guy we could look up to and get more than just basketball skills from,” Stroh said of Jordan. “You know, work ethic and dealing with defeat, those things were a part of his story, too.”

And the approach for Obama?

“I just talked about him being an inspiration to people,” Stroh said.

Two days after the initial call, the same woman called back and told Stroh the news.

“She asked if it was OK if she put me on speaker,” Stroh said. “And then she said, ‘We just want to tell you that next week we’re going to fly you and a guest to New York City to have dinner with Michael Jordan and Barack Obama.'”

In a state of shock, sitting in rush-hour traffic on Interstate 435, Stroh said he initially did not believe it. He was not the only one.

“My wife thought it was a scam,” he said, laughing. “I thought, ‘Am I being punked here?'”

He wasn’t. And one week later, he was seated at Table 2, in a room of 100 people within ear shot of Jordan. 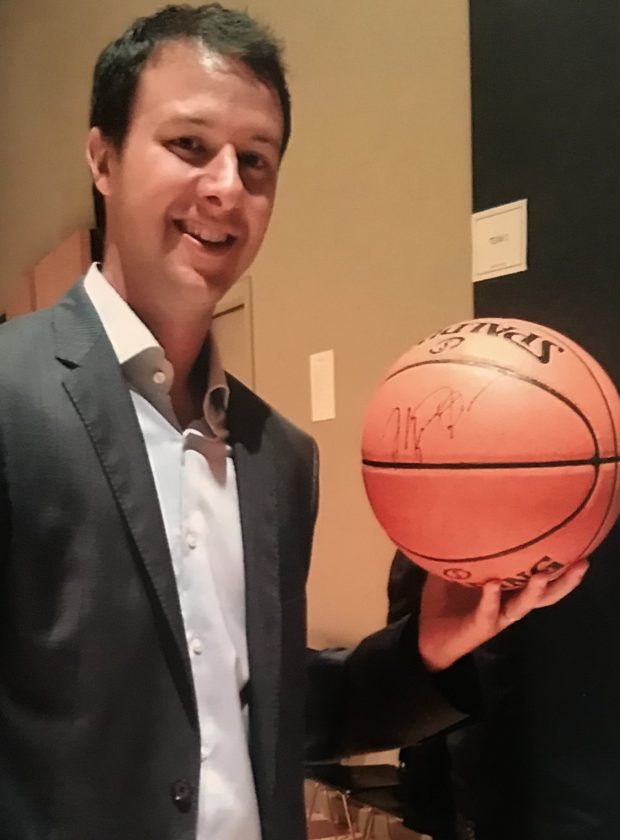 Free State basketball coach Sam Stroh shows off his brand new Michael Jordan-autographed ball which he received at an event in 2012 in New York City, where he got to meet Jordan.

“MJ was at Table 1 right next to us, and we got there early enough to scout it out and make sure I was on the same side he was,” Stroh said.

Former Jayhawks Nick Collison and Paul Pierce also were in attendance, and Stroh spoke with both KU greats about Kansas basketball.

Both Obama and Jordan addressed the crowd during the dinner, and Stroh said he was taken aback by the president’s comments after Jordan introduced him.

Stroh recalled Obama saying, “There’s not too many times when I come into the room and I’m like the fourth or fifth most interesting person.”

Stroh says Obama continued: “And then I’ve got this guy introducing me, when it should be the other way around. I should be introducing Michael.”

“It was pretty cool to see that,” Stroh said.

After dinner, Stroh and one other winner and her husband took their spots on a 30-person charter bus to a venue where some of the biggest names in basketball played a team game of HORSE.

“He was just sitting in the back of the room talking trash on everyone,” Stroh said. “I was nervous. But I did all right and made a few shots.”

After the game, Stroh received an introduction to his childhood hero. The anticipation sent his nerves racing.

“I didn’t want to screw this up and come off like the crazy fan,” Stroh said. “But I did want to say hi to him.”

A security guard arranged the meeting and Stroh, who had just purchased a new pair of Jordans to wear before leaving Kansas City, will never forget any of it.

“We talked for a minute and then he looked down at my shoes and said, ‘By the way, I like your taste,'” Stroh recalled. “So it was worth going out and buying a new pair of J’s.”

There was no media at the event and when the participants arrived, they placed their cellphones in bags and wrote their names on the outside in black marker.

Stroh pocketed one of the markers, and it came in handy after the game of HORSE when Jordan caught him eyeballing him with a ball in a hand.

“He saw me and he was like, ‘Get over here,'” Stroh said. “So he signed the ball and we took a picture. It was a very cool, very surreal moment.”

Those memories, as much as all of Jordan’s championship seasons and high-flying dunks, have been on Stroh’s mind throughout the first four episodes of the 10-part documentary.

And the Free State coach said he would never forget that nearly 10 years after his last game in the NBA, Jordan was still the biggest star in the room that weekend.