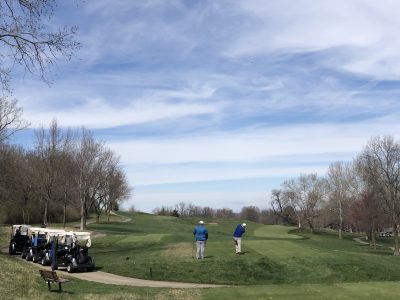 A group of local golfers tees off on the ninth hole at Lawrence Country Club on Wednesday, March 25, 2020. LCC, along with other courses in Lawrence, have made changes to their regular operations to comply with the current guidelines and suggestions designed to combat the spread of the coronavirus.

Golfers will need a membership to one of the local country clubs to get out on the golf course during the next few weeks, and even that comes with limitations.

As of Wednesday, courses at Lawrence Country Club and The Jayhawk Club remained open to members, while the city’s lone public 18-hole golf course, Eagle Bend, had been closed in compliance with the recent stay-at-home order designed to slow the spread of the coronavirus.

As a city-owned and city-operated facility, Eagle Bend, like all Lawrence Parks and Recreation Department facilities, is currently scheduled to be closed until at least May 17. Lee Ice, LPRD’s assistant director for recreation, praised the city’s handling of such decisions and said the daily meetings and organizational structure has made everything easier to digest.

The golf course, which had been open through March 18, is now closed, and the flag sticks have been removed from the greens. The putting and chipping greens that surround the Eagle Bend clubhouse also are currently off limits.

“All we’re trying to do is adhere to the rules put in place by DouglasCounty and follow the practices of people around us,” Ice said.”The golf is probably one of the easier ones to adjust, just being outdoors like it is. But it’s basically a moving target at this point because we just don’t know. When we can open again, we’ll be the first one to let everybody know.”

At The Jayhawk Club, head golf professional Garret Walker said only members were allowed to play the course, provided they were willing to walk.

The Jayhawk Club pro shop has been closed, and Walker said the club’s food operation also has been limited to take-out orders.

The flag sticks remain in the holes on the greens at The Jayhawk Club, but Walker said the rakes were removed from the bunkers to prevent golfers playing the course from touching the same items.

Because the pro shop is closed and the tee sheets are not in use, Walker said he did not know how many golfers had been playing during the past couple of weeks. He had, however, seen several people walking for exercise and riding their bikes on the cart paths when the weather cooperated.

“It’s kind of like a park out there right now,” Walker said on Wednesday. “We’re just kind of going day by day until we have more directives that say what we can and can’t do.”

That’s the same approach taken by LCC, but that course remains open to members in a greater capacity.

Those steps include: single riders only in golf carts; disinfecting the carts after each round; shutting off access to the locker room, bag room and golf simulator room; removing sand bottles from carts; and removing rakes and trash cans around the course.

“Basically, anything that people can potentially touch on the golf course,” Jones said.

Jones also said devices had been inserted into the cups on each green that make it easier to grab your ball without touching the cup or the flag stick and that tee times had been adjusted to keep golfers spread apart as much as possible while on the course.

While LCC has continued to offer food and beverages over the past couple of weeks, Jones said that would stop on Friday.

That does not mean LCC wants its members staying away altogether.

“On a day like today, we probably have 50 to 75 golfers signed up,” Jones said. “So, yeah, when the weather’s good I think people are going to want to play. And until we’re told they can’t, we want to allow them to do that while still practicing the proper precautions.

“We’ve been a part of the community here since 1914 and a lot of our members are small business owners and it’s nice that they can get a little mental relief right now. We just want everyone to stay safe and hang in there as best they can.”