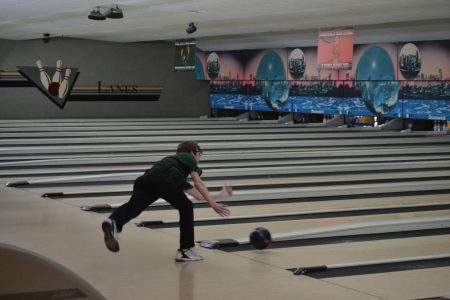 Free State senior Porter Neidow rolls a ball down the lane during a meet Friday at Royal Crest Lanes on Jan. 10, 2020.

A pair of city bowlers made the All-Sunflower League second team to highlight the postseason accolades for bowling this year.

Free State senior Porter Neidow made the second team in the boys division, while Lawrence High senior Emilie Rodman received a second-team selection on the girls side. No other city player was named to the first or second team.

To end the year, Rodman ended up placing 54th at the state bowling meet. Neidow went with his entire team, where the Firebirds finished sixth as a squad. FSHS was actually 24 pins away from finishing second in the team standings.

On the girls side, Lawrence’s Lana Chieu and Free State’s Ashley Edwinson were recognized on the honorable mention team.

Olathe Northwest’s Spencer Giffin was named the boys bowler of the year, while Nichole Thomas of Shawnee Mission South was picked as the girls bowler of the year. Olathe East’s Chuck Thibodeau (boys) and Jim Anderson (girls) were tabbed coach of the year in their respective division.