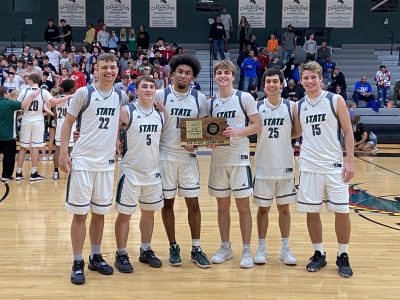 With plenty of state tournament veterans and senior leaders on its roster, Free State is looking to make an impact in its fourth straight trip to state.

But in order to pull off a deep run, the sixth-seeded Firebirds will have to get past a team that stonewalled them in their last two trips: No. 3 seed Blue Valley Northwest.

Thursday’s matchup will be the third straight year that the Firebirds and Huskies have met at state. In the past two tourneys, BV Northwest rolled past Free State and eventually won a state title. Free State’s best finish under Stroh came two years ago, when the Firebirds fell to the Huskies, 51-40, in the 2018 Class 6A state championship game.

While Free State’s past with BV Northwest will surely be on Stroh’s mind, he also pointed out the value of being at the state tournament four years in a row and having a team with plenty of veterans.

This year, senior leadership has played a key role for the Firebirds. Guards Wyatt Durland, Ethan Lincoln and Olin Yoder and forwards Tate Fanshier, Alyus Wisdom and DK Middleton have all played significant minutes this season.

That’s especially true for players like Yoder, who rose through the ranks from the freshman and sophomore teams.

The Firebirds have a 17-5 record, a share of the Sunflower League title and a state tournament berth, but that doesn’t mean things haven’t been easy for them this year. Sophomore guard Mozae Downing-Rivers rolled his ankle in a tight 66-63 road win over Olathe North, and losses to Olathe East and crosstown rival Lawrence High almost derailed the Firebirds’ chances at a league title.

However, Free State has always seemed to find its way again.

“All season we’ve bounced back after losses,” Stroh said. “We’ve had some tough losses, and I think we’ve learned from them. Our guys are smart. (We’ve done) a lot with film, a lot in the classroom.”

The Firebirds have won seven of their last eight games, and Yoder said they’re hitting their stride at an opportune time.

“We’ve had some ups and downs (this season),” Yoder said. “But to have everything come together at the right time and get to state and playing our best ball is a great feeling.”

Both Stroh and Yoder recognize the Sunflower League slate and the sub-state victories helped prepare the Firebirds for this moment. Free State had to beat Junction City and Topeka High to return to the state tourney.

“Those are two very good teams and that’s what we’re going to see at state, if not better,” Yoder said. “They did a good job of preparing us. We’re going to have to play teams of that caliber and play our basketball and play hard for 32 minutes.”

Free State will tip off against Blue Valley Northwest at 4:45 p.m. Thursday in Wichita.