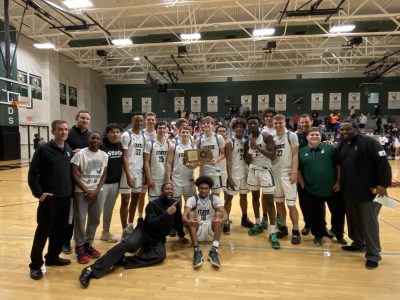 Free State sophomore Mozae Downing-Rivers was trapped at midcourt, desperately searching for a teammate. He quickly found senior guard Olin Yoder who snatched the pass and stepped — or rather jumped — into a 3-pointer.

Yoder’s huge triple with just over two minutes to play — the first and only field goal for the Firebirds in the fourth quarter — helped Free State hold on for a 58-48 victory over Topeka High on Saturday in the Class 6A sub-state championship.

This will be the Firebirds’ fourth straight trip to the state tournament.

However, this game almost slipped away from the Firebirds. Yoder led the way with 12 points, and he and fellow senior guard Ethan Lincoln shot 6-for-12 from beyond the arc.

And while the fourth quarter was the Firebird’s highest point total of the night (18), Free State shot 1-for-3 from the field and 15-for-20 from the free-throw line during the period.

The Firebirds’ lead hovered around 6 or 7 points for the majority of the second half, but the Trojans made a run late in the fourth quarter. Topeka High junior guard Geivonnii Williams hit a 3-pointer on the wing to cut the lead to 44-40.

Later, fellow junior guard Jalen Smith’s pair of free throws and another layup from senior guard Da’Vonshaii Harden — who led the Trojans with a game-high 21 points — kept the game within 5.

But whether it was Yoder’s 3 or the Firebirds’ plethora of chances at the charity stripe, the Trojans couldn’t regain the lead late.

“I thought (the momentum) was going to shift,” Stroh said. “A couple of their shots went in and out. We made some big free throws. We couldn’t make two; we just kept making 1-for-2. But we got some big rebounds, then Olin hit the shot at the top of the key to put it back to 6.”

Three Free State players scored in double figures, with Lincoln (11 points) and junior center Andrew Piper (10 points) joining Yoder. The Firebirds bench provided a spark off the bench, led by senior guard Wyatt Durland on both ends of the floor.

Most importantly, the Firebirds maintained composure against a surging team in the second half, something that’s been key over the past few games. Topeka High led briefly in the first quarter, but after Durland scored 5 quick points and grabbed a steal, the Trojans never made up the ground.

“Every single one of those guys gave us something tonight,” Stroh said.

Despite the physicality and the fouls — both teams were in the bonus with over three minutes to play in the fourth quarter — the Firebirds held on. This is Free State’s eighth win in the past nine games, with the lone loss coming in the City Showdown to Lawrence High on Feb. 21.

“It wasn’t the prettiest of games, but as I told the guys (in the locker room), no one this time of year wants to go home,” Stroh said. “I’m proud of the guys, and I’m excited to get back down to Wichita.”

Free State will next play in the Class 6A state tournament. Play begins Thursday in Wichita.