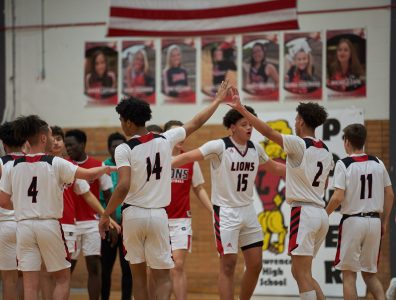 Lawrence High players Bryce Johnson (14) and Zeke Mayo (2) high five while walking back to the bench during a game against Olathe East Friday night at LHS on Feb. 14, 2020.

In Saturday’s sub-state title matchup, Lawrence High’s boys basketball team faces Wichita Southeast — the team that ended LHS’ season in the opening round of the state tourney a year ago.

The title game tips off at 6 p.m. Saturday at LHS.

“I think we are looking forward to that game,” Lawrence junior Zeke Mayo said. “Another revenge game for us. If we get that win, that’s just huge.”

Last season, LHS split its two meetings with Wichita Southeast. The first game took place in the semifinals of the Topeka Invitational, in which Lawrence cruised to a 72-46 victory en route to winning the midseason tournament.

But in the state tourney, LHS missed a game-tying 3-pointer at the buzzer and lost to Wichita Southeast, 70-67. The Golden Buffaloes went on to take third place at state.

This year’s Wichita Southeast team looks fairly similar to last year’s. Junior guard Jackie Johnson, who scored 32 points against LHS in the 2019 state tournament, is still the go-to option for the Golden Buffaloes.

Lawrence, on the other hand, had to replace four starters from last year’s team. But this year’s Lions are still able to score in bunches at any point in the game.

LHS averaged over 65 points per game in the regular season, which was the third-best mark in the 6A West division. Mayo and fellow seniors Peyton Mallory, Mayson Quartlebaum, Bryce Johnson and Ruben Littlehead make up a starting rotation capable of getting off to a hot start.

“It is great not having to rely on one guy to put up 20 a game,” Mayo said. “When you have more guys that can do it, that is big. It mixes up their defense, and they don’t know who to guard or how to play us.”

It all sets up an intriguing rematch this weekend, with a trip to the Class 6A state tournament on the line. LHS has advanced to the state tourney 39 times, including five years in a row. Wichita Southeast has secured 22 state berths.

If all goes well, the Lions will have the opportunity to hoist another sub-state championship plaque after one final game in “The Jungle” this year.

“Home-court advantage will be good for us,” Littlehead said. “I think we just need to keep having fun and keep that energy.” 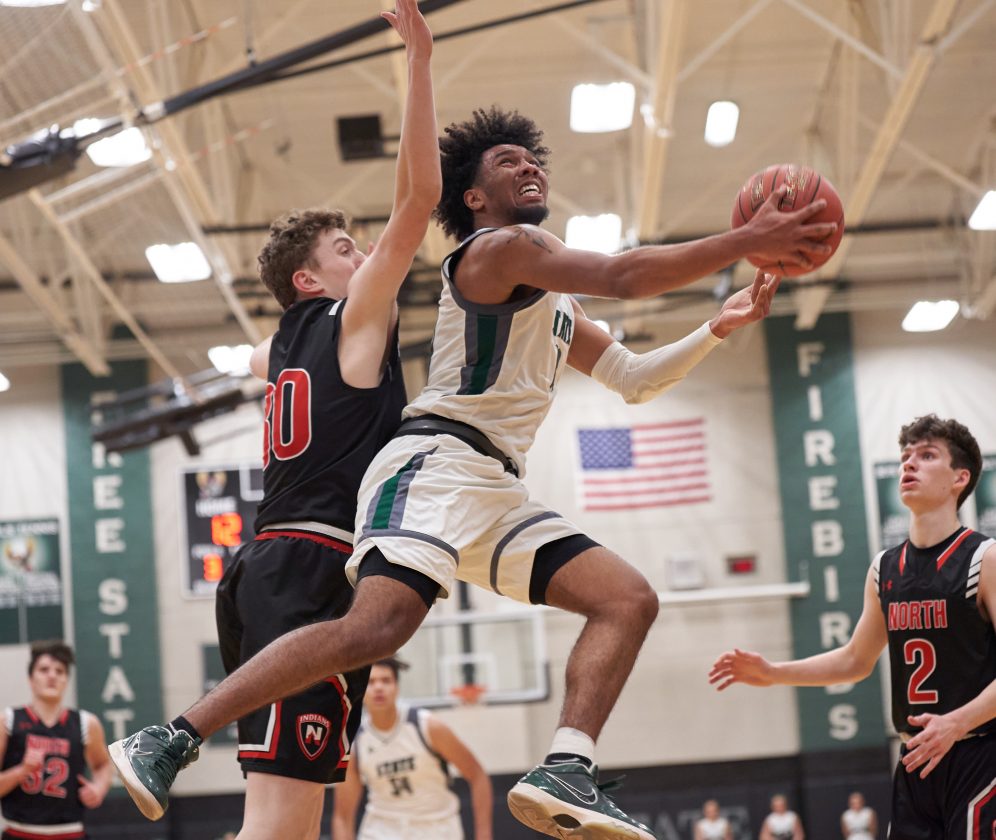 Free State’s boys basketball team will also have the chance to earn a state berth at home on Saturday.

Both the Firebirds (16-5, No. 7 in Class 6A) and the Trojans (16-5, No. 8 in Class 6A) were ranked in the final KBCA poll and hope to end their season in Wichita. Free State has been in the Class 6A state tournament in each of the previous three seasons, while Topeka High hasn’t been since 2018.

“Some of our seniors have been with us all three years in a row we’ve been,” FSHS head coach Sam Stroh said. “They’ve been there; they played in it. But we have to worry about playing Topeka first. If we’re fortunate enough to win, I do like our experience and our leadership.”

Fortunately for the Firebirds, the Trojans figure to do a lot of the things that Junction City did on Wednesday.

THS will likely do a lot of full-court pressure, something that bothered Free State during the second quarter in the sub-state opener. Junction City ended the first half on a 7-0 run in the last few minutes and got layups off three consecutive turnovers by FSHS.

As a result, the Blue Jays outscored the Firebirds, 24-10, in the second period. The hosts eventually settled down in the second half, however.

“We got to stay poised, stay under control, and move the ball,” sophomore point guard Mozae Downing-Rivers said.

Free State should be more equipped to handle the press against THS. The Firebirds spent time watching film in preparation, and they have only lost two of their last 10 games.

This is a veteran squad led by senior DK Middleton, who was a contributor on a Free State team that fell in the state championship game two years ago. Ethan Lincoln, Wyatt Durland, Tate Fanshier, Alyus Wisdom and Olin Yoder also provide valuable leadership as seniors.

It is a class that has made it to the state tourney in each of the last three seasons, which is the best stretch in program history. FSHS has qualified for state eight times, while Topeka has done so on 55 occasions.

“Win and we’re in the state tournament; lose and our season is over,” Stroh said. “We just need to relax, play basketball and play our game.”

All 6A boys sub-state title games