‘It was a breakthrough moment’: Free State girls upset Derby in overtime thriller 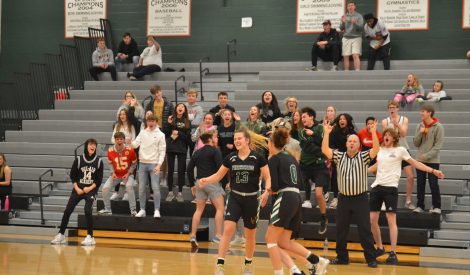 Free State senior Caely Kesten (13) and the FSHS student section celebrate her made 3-pointer at the buzzer to end the third quarter during a game against Derby. FSHS outlasted Derby in overtime in the semifinals of the Lady Firebirds Classic on Friday at FSHS on Jan. 31, 2020.

A floater by Derby freshman Maryn Archer hit the back of the rim before falling safely to the floor. Pandemonium ensued after that.

Free State junior Shannon Clarke raised her arms in triumph before turning around for an emphatic chest bump with senior Caely Kesten near the top of the key. The rest of the Free State girls basketball team joined in on the celebration following a 53-52 overtime thriller against Derby on Friday at FSHS.

With the win, the Firebirds (6-5) advanced to the championship game of the Lady Firebirds Winter Classic. And they also made a serious statement by handing the Panthers (No. 5 in Class 6A) their second loss of the season.

“I think this opens a lot of people’s eyes to what Free State basketball is and what it can be,” Clarke said. “Derby is a great school. Coming out and being able to beat them, especially in front of our fans, it opens people’s eyes here at Free State and across the state — to not sleep on Free State.”

While the win wasn’t official until Archer’s misfire, that final play were merely a formality. In fact, Free State players began to understand the gravity of the situation one possession before that sequence.

Clinging to a 53-52 lead, Clarke collected a rebound with 4.2 seconds remaining in the free period. She was immediately fouled by the Panthers (8-2), and that’s when the upset started to feel real for the Firebirds.

From under the basket, Clarke gave Kesten a hard two-handed shove and roared in celebration. Clarke eventually missed both attempts from the free-throw line, which ended up being her only two misses from the charity stripe in a 20-point performance.

“That sealed the deal,” said Kesten, who poured in 17 points in the win. “It was just Shannon wanting to win. It is just something that she has, and that’s what I love to see from her.” 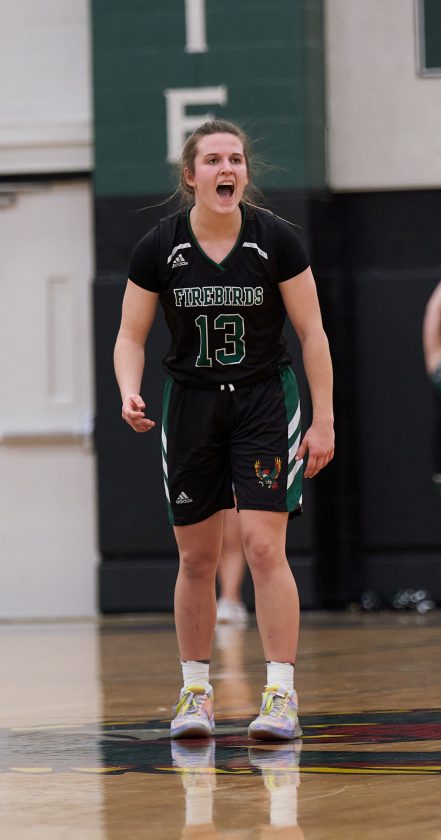 Free State senior Caely Kesten (13) screams in excitement after a made 3-pointer by a teammate during the opening round of the Lady Firebirds Winter Classic on Thursday at FSHS on Jan. 30, 2020.

From start to finish, though, it took a total-team effort for FSHS to come away with the narrow victory. Senior Joy Nunoo drilled a 3-pointer for Free State’s first points of the night. Junior Evy Harrell had a smooth layup in transition late in the second quarter.

Junior Daeci Walker, senior Mackenzie Moore, junior Anna McIntire, junior Robin Todd and senior Nyasha McVay all came through in key moments on both ends of the floor for the Firebirds.

Still, the theatrics in overtime were a necessity after FSHS coughed up a comfortable lead in the fourth quarter.

Free State was seemingly in control early in the fourth period, taking a 43-33 advantage after Kesten netted a basket at the 6:01 mark. She had hit four 3-pointers, including one at the buzzer, in the third quarter to give the Firebirds some breathing room entering the final frame.

“I couldn’t be any more proud of the way they competed and played tonight,” FSHS head coach Nick Wood said. “All year long, we have talked about who we can be and what we have in us. And tonight, it happened. It was a breakthrough moment. They got to see the potential that they have.”

The Panthers reclaimed a 50-49 advantage with 1:29 left in regulation, but Kesten evened things back up at 50-50 with a free throw just 16 seconds later.

After a timeout, Free State’s lineup proceeded to guard a minute-long possession by Derby. The play ended with a missed shot, but it was a stretch that proved to be pivotal for the Firebirds in the win.

“That’s all just guts and want to,” Wood said. “It was all of them. We had to switch screens, they had to communicate and they had to box out. It was great.”

Yet that particular possession perfectly illustrates just how far the Firebirds have come.

Two years ago, Free State didn’t get one win in this event before placing eighth in the 2018 Lady Firebirds Winter Classic. Last winter, Free State fell in the semifinals before claiming third place in its own midseason tournament.

“Getting to see our program turn it around the way it has, it is awesome to see,” Clarke said. “We know all the hard work that we have put into it.”

Even this season, Free State went 1-2 before finishing sixth in the Lady Hawks Classic at Olathe East in December. FSHS now has a shot at a championship trophy, if it can pull off another upset.

“Tomorrow is going to be a hard game, so we have to keep the right mentality,” Kesten said.