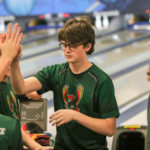 The Firebirds congratulate Joey Taylor during a tournament at Royal Crest Lanes on Jan. 10.

Throwing strikes was prohibited during the final practice before the start of the 2020 bowling season.

Burton Gepford’s request to the Free State bowling team might have seemed strange, but he had his reasoning. He wanted the Firebirds to work on picking up their spares Wednesday afternoon at Royal Crest Lanes.

And that philosophy just might be the very thing that helps Free State send as many bowlers as possible to the state tournament this winter.

“Spares win championships,” FSHS senior Joey Taylor said. “Every time you miss a spare, you lose 11 pins off your max score. You just have to make your spares.”

Both Lawrence High and Free State will officially begin the new bowling season in the Free State Bowling Invitational this week, which will take place at Royal Crest Lanes. The girls will compete on Thursday, while the boys will play on Friday. For both days, doors will open at 8 a.m. and award presentations are slated to take place at 5 p.m.

The two city teams enter the new campaign under new leadership. Gepford, who previously was the FSHS head coach from 2013-17, is back at the helm after Chuck Law served in the position for the last two seasons. Gary Graves, meanwhile, replaced Paula Bastemeyer as head coach for LHS.

But both teams still have high expectations entering this year and picking up spares is a key element for everybody to accomplish their goals.

“I’m just trying to have fun and make the best of it,” LHS senior Emilie Rodman said. “It would be cool to go back to state, and take the whole girls team.” 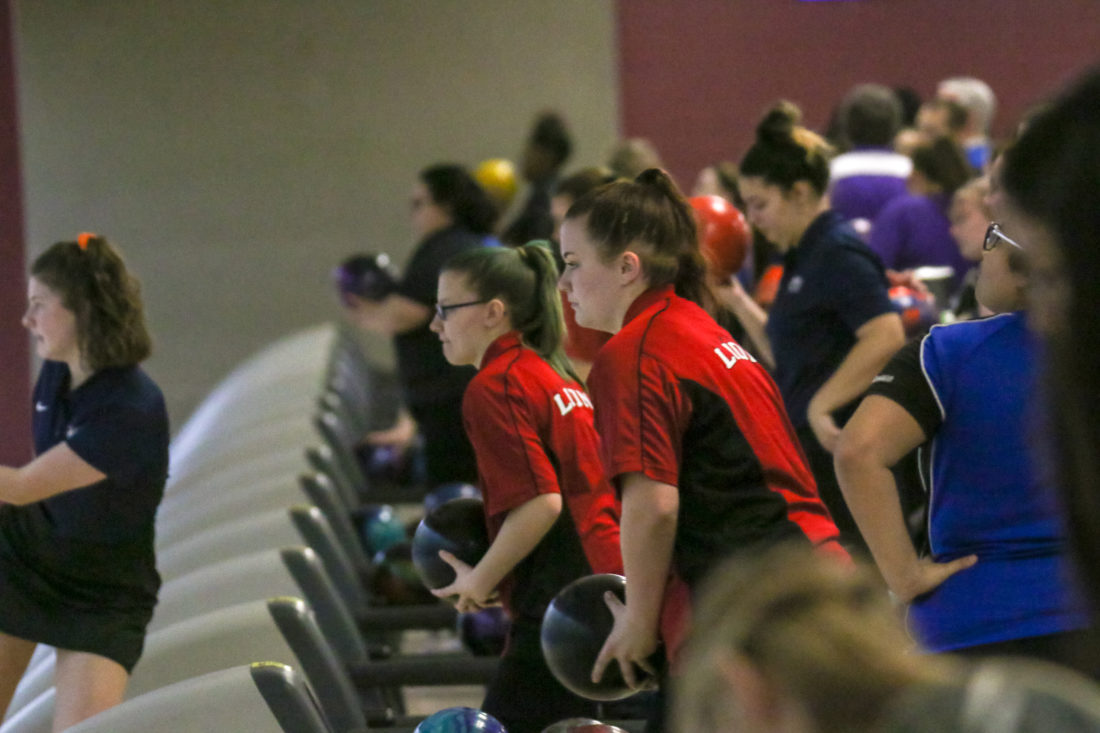 Lawrence High bowlers get ready for their approach in a tournament at Royal Crest Lanes on Jan. 11, 2019.

FSHS boys were the only city team to qualify for state last year. The Firebirds, who placed sixth at the 6A state meet, are aiming to do even better this year with a few key bowlers coming back.

Taylor actually led Free State in scoring in the state meet during his 10th-place finish. He’s improved his craft for his final year along with fellow seniors Porter Neidow and John Hamer. Sophomore AJ Baker also figures to have a major impact after a strong rookie campaign.

“He will be a very good bowler very, very soon,” Taylor said of Baker. “He was great last year. He did the best out of our team for regionals. He will be the top guy here next year.”

On the girls side, FSHS lost it’s only two state qualifiers due to graduation. Still, the Firebirds have plenty of younger bowlers capable of playing well this year. Junior Rena Stoupakis is back after competing at the varsity level in her first year in the sport.

Angel Westfall and Aleah Garber are also expected to make strides this season for the Firebirds. Freshman Kaitlyn Harrington, who managed to post the highest score in tryouts, is also going to make an impact at the varsity level.

“I think we are all just excited to be doing it again,” Stoupakis said. “I think it is all a lot of fun, and we just like being around each other.”

Each LHS squad has a single returning bowler that gained experience at the state meet a year ago. Rodman, who placed 50th last season, is the lone returner on the girls side. Lana Chieu and Bean Foster are also expected to be key contributors for the girls team.

Senior Rhett May brings state experience to the boys side after placing 37th last season. May’s focus this year is on returning to state with his entire team, something that could be possible with talented bowlers like Nick Wallace and Josh King slated to make an impact.

“This year, I’d like to take the team (to state),” May said. “I think it would be more fun of an experience. Hopefully, the older guys can help the younger kids just so we can continue on the great tradition.”