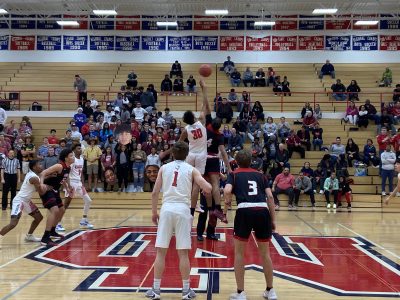 Olathe — Lawrence High rolled to an 84-55 road victory over Olathe North on Tuesday night. This is the Lions’ 11th-straight win.

“We felt like if we shared the ball and just made them work on defense, we’d get some good looks,” LHS coach Mike Lewis said. “And I thought our guys came out and were pretty steady and didn’t get into any of the immature, silly plays and just played really solid.”

“If we can stay unselfish and continue to share the ball and be a team that really cares about each other, then I think we can be as good as we want,” Lewis said. “We want to be at our best in March, so I feel like we’re making good strides (toward that).”

The Lions (14-3, 8-1 Sunflower League) wasted no time Tuesday, jumping out to a 7-0 lead and forcing an early timeout from the Eagles to regroup. And besides Olathe North senior guard KT Raimey trying his hardest to get out in transition, the Lions kept rolling.

The LHS lead grew to 20-8, and much of the Lions’ success came from backdoor cuts. Senior guard Valdez White scored three layups, Johnson caught an alley-oop, and Mayo got a second-chance layup — all off backdoor cuts.

“And that was another thought going in — let’s not just settle for 3s,” Lewis said. “Let’s really try to go at them. And I thought our guys did a really good job of chasing those opportunities and going hard, making speed layups, and also finishing at the rim and making them count.”

Olathe North (7-9, 5-4 Sunflower League) couldn’t contain LHS inside, and even as Raimey got a layup to go at the buzzer, the Lions led 26-16 at the end of the first quarter.

And it was more of the same in the second quarter, as Johnson and Quartlebaum were feasting on the low block. An emphatic dunk from Mayo in transition and a 3-pointer from senior guard Ethan Bentzinger pushed the lead to 38-19.

Later in the quarter, Olathe North cut it to 44-30, but a technical on Raimey sent Mayo to the free-throw line. Mayo made both free throws, plus added a 3-pointer while falling down, scoring 5 points in one possession.

The Lions led 51-34 at halftime and — outside of a few bad turnovers — were in full control. LHS finished with 18 turnovers.

“I think they were the aggressor there for a little bit and it led to some of those turnovers,” Lewis said. “But I liked the way we settled down and took care of it there.”

Johnson, Mayo and Quartlebaum kept attacking the paint in the third quarter, giving the Lions a 65-42 lead. The Eagles would make a 3 or get a layup in transition, but the Lions consistently had an answer.

One of those came at the end of the third quarter, as Bentzinger hit another 3-pointer at the buzzer to give the Lions a 68-47 lead.

The Lions were rolling by the time the fourth quarter came around, with a 3-pointer from sophomore guard Jackson Dooley giving LHS a 29-point lead — its biggest of the night.

Now with this win behind them, LHS looks forward to one of its toughest games of the season — the City Showdown against rival Free State.

“We’ll be relaxed, we’ll be loose and we’ll be having fun,” Lewis said. “And hopefully enjoy a good Friday night of basketball.”

LHS will next play Free State in the City Showdown at Allen Fieldhouse on Friday. Tipoff is set for 8 p.m.