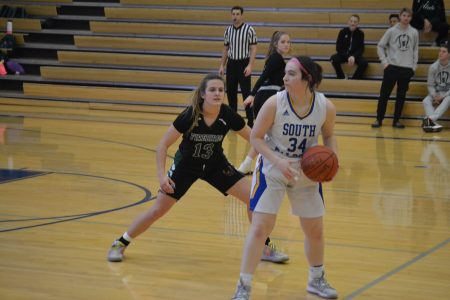 Free State senior Caely Kesten (13) guards the ball during a game against Olathe South on Friday night at OSHS on Feb. 7, 2020.

Olathe — In the closing moments of the third quarter, Olathe South guard Raegan Halliday drove through the Free State defense with her right hand.

Halliday lofted a left-handed floater in the lane, which ultimately rattled around the rim before falling to the floor at the buzzer. It was one of few defensive possessions that the Firebirds kept the Falcons from finding the bottom of the net in the third period.

Behind a 16-point effort in the third frame, Olathe South cruised to a 52-29 victory over Free State on Friday night at Olathe South High School. FSHS has now lost three games in a row since its overtime thriller over Derby in the semifinals of the Lady Firebirds Winter Classic.

“We got in a hole that made it difficult for us to get out of,” FSHS head coach Nick Wood said. “The third quarter was tough. We knew Olathe South is a really good basketball team, so we knew we were going to have to play well to compete.”

It took a valiant effort for Free State (6-8, 1-5 Sunflower League) to put pressure on the hosts, which led all night after scoring within the first 18 seconds of the contest. Olathe South (9-5, 5-2 Sunflower League) led by as many as 12 in the second before Free State chipped into the deficit, making it a single-digit game at the intermission.

Leading 24-15 entering the second half, Olathe South then removed any doubt by overwhelming the opposition for much of the third quarter. Senior Dani Winslow, who is 6-foot-0, netted two quick buckets for the Falcons to stretch their lead back out to double digits.

Free State senior Caely Kesten then converted on her lone made field goal of the night at the 6:15 mark to break the team’s scoring drought, but Olathe South responded with a 7-0 spurt by getting three interior baskets.

Junior Evy Harrell scored the only other Free State bucket with 3:31 left to play, though Olathe South answered with the decisive blow. After a 90-second possession, which featured two attempts from beyond the arc, sophomore Reagan Ponzer buried a triple to give the Falcons a 20-point advantage.

“They did a good job of making it really difficult for us to score,” Wood said. “It is more frustrating for the girls, (when) they are not seeing the ball go through the net.”

Four different players scored for the Falcons during a 16-point effort in the third quarter. They went 6-for-14 from the floor over that span as well. At the same time, Free State only converted two of its seven attempts from the field in the third period.

For the game, Free State struggled to get good looks over Olathe South’s length. Junior Shannon Clarke paced the team with 14 points, but no other Firebird scored more than 4 points in the loss.

Both Mandy Truitt and Winslow finished with 13 points and 12 points, respectively, to lead the way for Olathe South.

“We are going to win basketball games; it just didn’t happen tonight,” Wood said. “It has been a rough stretch of playing really good basketball teams. Our league is really good.”

Things won’t get any easier for the Firebirds, however. Free State will host Olathe West (No. 8 in Class 6A) at 5:30 p.m. Tuesday.