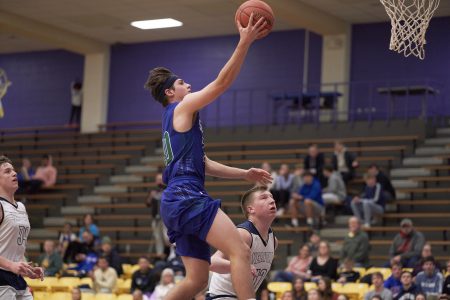 Even with a shorthanded roster, Bishop Seabury’s boys basketball team took care of business on Tuesday.

The Seahawks jumped out to a 21-0 lead in the first quarter before coasting to a 68-13 victory over Hyman Brand Hebrew Academy at BSA. It was an impressive win considering the fact that Bishop Seabury was playing without starters Cobe Green and Zach Bloch, who sat out as a precaution because of previous injuries.

Bishop Seabury (10-2, No. 1 in Class 2A) has now won three games in a row since placing fourth at the Baldwin Invitational in late January.

“Don’t feel like everyone stepped up the way I would (have) liked to fill in,” BSA head coach Jonathan Raney said. “We did some good things, especially coming out of halftime. Thought (Joao Carlos) Ramirez got something out of the game. (He) played really hard and with good energy.”

Ramirez, a 6-foot-6 sophomore forward, led the way with 17 points for the Seahawks, who scored at least 17 points as a team in each of the first three periods. Bishop Seabury posted a 24-4 edge in the third quarter to run away with another lopsided win.

Senior Luke Hornberger and freshman guard Enzo Karam finished with 15 and 13 points, respectively, to join Ramirez in double figures for the hosts. Earlier in the night, Bishop Seabury’s girls basketball team picked up a 30-20 victory over Hyman Brand Hebrew Academy.

Both teams will be back in action with a back-to-back stretch this weekend. Bishop Seabury will play host to Grandview Christian on Friday before welcoming Veritas Christian for another crosstown clash on Saturday.

The Lawrence High girls bowling team was victorious in a five-team meet at Royal Crest Lanes on Tuesday.

Behind a pair of top-five individual bowlers, LHS finished with a team score of 2,093 pins. Shawnee Mission North, the runner-up in the varsity girls competition, posted a score of 1,854 as a squad.

As has been the case for much of the season, Lawrence senior Emilie Rodman was the top individual bowler in her division. Rodman finished with a series score of 599, which was 46 pins better than Alyssa Williams of Shawnee Mission North. Lana Chieu of LHS notched third with a score of 543.

On the boys side, a trio of individuals finished just outside the top-five for Lawrence. Remy Fowler (sixth), Josh King (seventh) and Sebastian Daniel (eighth) all finished with a series score of 537 or better. The Lions took third as a team in the varsity boys division.

LHS will be back in action at Olathe Lanes East Bowling Center on Friday.

Perry-Lecompton suffered two losses in a home doubleheader with Jefferson West on Tuesday.

The PLHS girls basketball team trailed from the start in a 48-33 loss to Jefferson West. Blaise Ball was the only player to finish in double figures for the Kaws (8-5), scoring 11 points in a losing effort.

In the nightcap of the doubleheader, the PLHS boys gave up a late lead in a 63-58 loss to Jefferson West. After scoring 22 points in the third quarter, Perry-Lecomton gave up 20 in the final period. Parker Stone led the Kaws (9-4) with 19 points in the loss.

Perry-Lecompton will travel to Hiawatha on Friday.

Plenty of local football players signed their letters of intent on Wednesday.