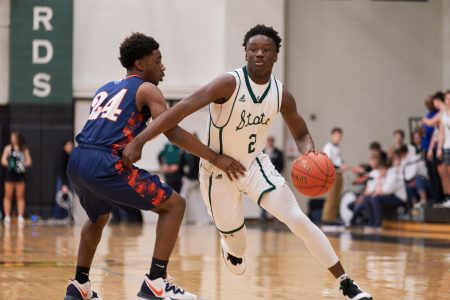 In what felt more like a track meet than a basketball game, Olathe East rolled to a 66-45 victory over the Free State boys team Tuesday.

It was a sprint from the opening tip as Free State (9-4, 4-1 Sunflower League, No. 5 Class 6A) and Olathe East (7-8, 5-3 Sunflower League) traded buckets back and forth for the first five minutes of play.

The Hawks finally gained an edge when they went on an 8-0 run to end the first quarter, jump-started by a pair of 3-pointers from senior forward Andrew Sonner and senior guard Jack Whitehead.

“I don’t think we responded at all,” Stroh said of the pace of the game. “That was a beatdown. It was 4-0, then from that point forward they took control and did whatever they wanted.”

As Olathe East separated with a 17-10 lead going into the second quarter, Free State was looking for answers to its scoring drought. The Firebirds got early buckets from senior forward DK Middleton and junior center Andrew Piper but missed some open looks down the stretch.

Things didn’t slow down in the second quarter, either, as Olathe East extended the lead to 29-19 midway through the quarter.

The Hawks led 35-27 at halftime, and Stroh said the Firebirds “were fortunate” to be down only eight points, calling for a spark from Free State’s veterans.

“We could’ve been down 15, 17 something like that,” Stroh said. “We needed some better leadership coming out of the half. I wasn’t seeing what I needed to see in our faces, in our body language.”

The Hawks stormed out of halftime with a quick 8-0 run. Free State junior guard Kris Daniels hit a 3-pointer in transition to stop the bleeding, but momentum had swung in favor of the Hawks again.

Later in the quarter, Sonner hit a pair of free throws to give the Hawks a 47-30 lead — their biggest of the night.

But Free State senior forward finally got a layup to go toward the end of the third quarter, starting a comeback by the Firebirds to cut the lead to 47-36 going into the fourth quarter.

Particularly in the second half, Stroh said his team got desperate with its shot selection, especially around the rim. But he was more concerned about his defense.

“We’re better defensively than that from an individual standpoint and a team standpoint,” Stroh said.

Both teams traded baskets to start the fourth quarter, and once again the Hawks went on another run. After Free State cut it to 54-42, Olathe East went on a 10-1 run that extended the lead past 20 points and essentially sealed the game.

Free State’s final score of 45 points was its second-lowest point total of the season, with the lowest being 39 points against Bishop Carroll on Jan. 25.

While Stroh left disappointed, he did say that two players came in off the bench to make an impact: Daniels and sophomore forward Dash Hawkins.

“But the hole was too big,” Stroh said. “Those guys brought some energy and kept playing hard to the end. Other than that, I thought those were the only two players that really showed up.”

Stroh said his team was ready to move on and have a “good film session” following the loss.

“Long ways to go,” Stroh said. “The grind is here and we’ve got seven league games left. We’re just going to get focused on that and obviously we’ve got a tough opponent in Olathe South on Friday.”

Tip-off at Olathe South is set for 7 p.m. Friday.