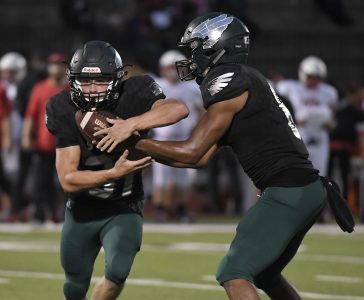 After a 59-14 win over Shawnee Mission North in Week 3, FSHS has a better sense of what that might be — at least on the offensive side of the ball. The Firebirds (2-1) scored on nine consecutive possessions at one point, which came after a three-and-out on the game’s opening drive.

Now, the key for the Firebirds will be maintaining that momentum in their road contest with Shawnee Mission West (1-2) at 7 p.m. Thursday at Shawnee Mission South. The Vikings are coming off a 30-10 loss to Olathe North.

“We have to execute our offense,” FSHS head coach Kevin Stewart said. “I think last Friday we got into more of a rhythm and we are starting to get identity of who we are. We are starting to figure out what we can be and what we are good at.”

Free State’s 59-point outburst last week came after the team combined for 62 total points through two weeks. But a lot of different variables led to the team’s best offensive performance in Stewart’s first year at the helm.

For one, senior Malik Berry moved back to quarterback in the third game after playing linebacker in the first two weeks. Berry, who was the team’s starting quarterback in 2018, went 10 for 14 for 216 yards and three touchdowns in his first game back under center.

Berry will remain the team’s starting quarterback this week in place of Colter Maldonado, who was sidelined with an injury.

“Malik did a good job getting rid of the ball and getting it to his receivers,” Stewart said. “I just felt like he had a lot of confidence back there, which helped the offense. Obviously your quarterback has to be healthy. Malik was healthy and he was able to do some things.”

It certainly helps that Berry has plenty of weapons around him, too. Senior receiver Marcus Preston hauled in six passes for 85 yards, including a 19-yard touchdown reception. Senior Tate Fanshier caught a 73-yard touchdown pass as well, and now has three scores on three catches this season.

“Sometimes it is good for the quarterback to just throw it to the best guy, which is Marcus,” Stewart said. “Sometimes we just need to get him the ball, and quit worrying about the reads. Then obviously when Marcus has success, it is going to open things up for guys like Tate.”

Junior running backs Dash Cleveland and Tyler Bowden each caught a ball out of the backfield as well. Baylor Bowen also netted a 14-yard catch.

FSHS utilized a lot of read-option concepts in the third week, which included pass plays off of that look. That can help keep the defense off balance, considering how much success FSHS has had running the ball through three games.

Bowden had recorded at least 100 yards in each of his first three outings, including a 120-yard performance against Shawnee Mission North. Cleveland also ran for 56 yards on three carries to add another element to the ground game last week.

Still, the Firebirds hope to ride that momentum in their Week 4 matchup against the Vikings.

“We have to execute, limit turnovers and play hard this week,” Stewart said. “I think if we can use some of our speed that’s going to help.”

Bishop Seabury recorded one win and one loss during Tuesday’s home triangular.

Sophomore Elena Weber led the team with six kills against Harmon, while Gabriella Aubel had five kills. Against Maranatha Christian Academy, both Eaghan Bible and Aubel each had six kills. Shea Hanna tallied three assists and 28 digs on the night.

Bishop Seabury (7-11) will travel to Wabaunsee this weekend.

Postseason is just around the corner for the fall sports season.

Area girls tennis teams found out their regional assignments, as locations were announced Wednesday afternoon. Both Lawrence High and Free State will compete in a regional meet Oct. 11-12 at Harmon Park Tennis Complex in Prairie Village.

Baldwin, meanwhile, will compete in a Class 4A regional meet Saturday, Oct. 12, at Kossover Tennis Courts in Topeka.

Baldwin football moving to Class 3A

The only area team that was impacted was the Baldwin football team. BHS, which had been in Class 4A, will move down to Class 3A for 2020-21. The Bulldogs are currently 0-3 to start their 2019 season.

Free State will compete in a tournament at Emporia on Saturday.