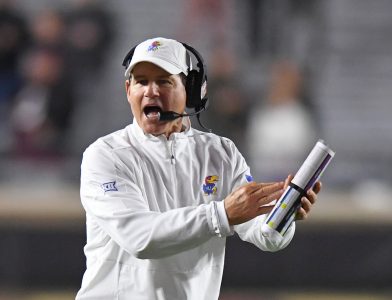 (Boston, MA, 09/13/19) Kansas Jayhawks head coach Les Miles calls a timeout during the second half of an NCAA football game against Boston College in Boston, Mass., on Friday, September 13, 2019.

Nothing changed about the offensive game plan in Week 3, at least according to Kansas head coach Les Miles.

Of course, we are all calling Miles’ bluff considering KU’s offense looked drastically different in its 48-24 win at Boston College last Friday. The Jayhawks scored six offensive touchdowns against the Eagles after doing so three times through the first two weeks.

So how exactly did KU’s offense come to life on a short week without making any major changes in the starting lineup? Well, the answer might just be as simple as the coaching staff switching up its formation usage.

To help illustrate that in this blog, I have charted every single formation used by Kansas during nonconference play. It will allow us to see what has worked for the Jayhawks through three games, and what might be a sign of things to come in Big 12 play.

Kansas has used eight different personnel packages through three games, as shown in this graphic below. 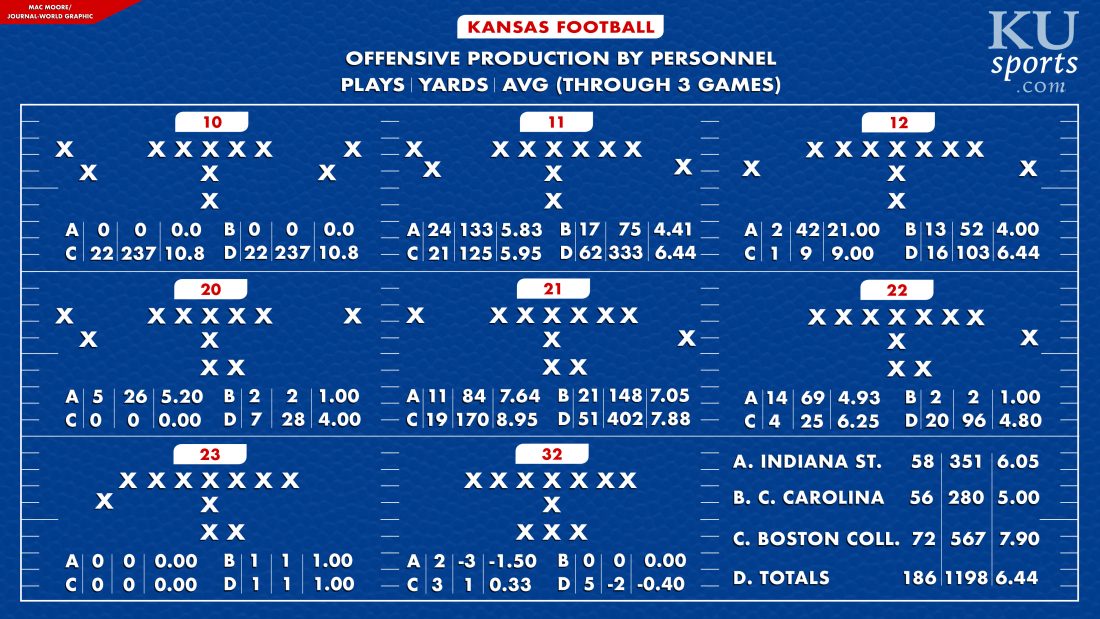 Of note, two plays from the Boston College were not charted due to the stream now showing those two plays. I also chose not to include Kansas’ final possession against Indiana State since the team was in victory formation. So the total numbers might be slightly off, but they still help give us an idea of what the Jayhawks have done.

With that, here are a few of my takeaways from charting KU’s personnel usage through three weeks:

Anybody watching the game tell something was different about the Jayhawks’ offense in their first road contest. But it was probably more extreme than you even imagined.

Kansas used three-or-more receivers on 43 of its 72 plays against Boston College. Prior to Week 3, KU had done so a total of 41 of its 114 plays in the first two outings. KU’s previous high in a game was 24 times against Indiana State.

The Jayhawks ran 10 personnel on 22 plays against the Eagles, which is something they didn’t do once in the first two games. It caught BC off guard, as KU picked up 237 of its 567 total yards with one back and no tights ends.

“Last week they opened the field up,” West Virginia defensive coordinator Vic Koenning told local reporters during his weekly availability. “The first two weeks they were in a lot of 11 and 12 personnel. Last week they went 10. And (Carter Stanley) shredded Boston College by throwing just basic zone and then running the RPO.”

The spacing is the biggest reason why the Jayhawks will likely keep using that type of look moving forward. It allowed running backs Pooka Williams and Khalil Herbert to combine for 311 yards on the ground, while also opening up passing lanes for quarterback Carter Stanley.

Much has been made about Miles’ history of using fullbacks. That is evident by how often Kansas used multiple-back sets during nonconference play.

KU used at least two backs on 84 of the team’s 186 plays during the first three weeks of the season. The Jayhawks went 21 personnel on 51 different plays, accumulating 402 total yards for an average of 7.88 yards per play.

Don’t expect this personnel to go away, because Kansas has been pretty consistent with its utilization of multiple backs. The Jayhawks had multiple backs for 32 plays in the season opener and have done so 26 times in each of the last two games.

In 21 personnel, in particular, KU has averaged at least 7.05 yards per play in every game.

That being said, multiple backs hasn’t necessarily meant many plays featuring two running backs on the field at the same time. The Jayhawks have ran 12 total plays with multiple running backs, which has turned into 114 yards and one touchdown.

Stanley’s 37-yard pass to Andrew Parchment against Boston College was a result of the opposing defense keying in on the two running backs.

Herbert also had a 41-yard touchdown run against Coastal Carolina, which was made possible due to the defense focusing on Williams. Herbert notched the team’s only score in a 12-7 loss off the misdirection.

Not as many multiple tight end sets in Week 3

Similar to his love for fullbacks, Miles has shown the willingness to incorporate tight ends into his game plan.

Through three games, Kansas has used multiple tight ends on 42 different occasions. However, KU only did that eight times against Boston College, most of which came in short-yardage situations.

Part of that can be attributed to Kansas using more spread formations with multiple receivers, as mentioned earlier. It is also a safe bet that James Sosinski’s absence was a factor, considering how involved he was in the first two games.

Stanley and Sosinski have linked up twice in 12 personnel, including a 15-yard play in the season opener against Indiana State.

Against Boston College, Stanley connected with tight end Jack Luavasa for a 19-yard touchdown on one play in 22 personnel.

Stanley’s 4-yard touchdown pass to Parchment on the fifth drive of the game also came in a two-tight end set. Both Luavasa and Mason Fairchild were used as blockers on the edge, while Parchment ran the lone route on 3rd and goal.