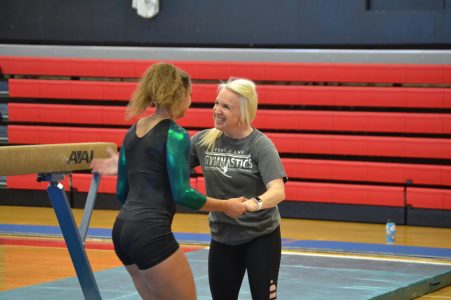 It is just three meets into the 2019 season, but both Free State and Lawrence High gymnastics squads have made massive strides.

And that is a credit to the new mindset for both teams under first-year head coach Katrina Farrow, who was an assistant for both programs the previous three seasons. Since the first day Farrow took over, she has empowered her players to shoulder more responsibility.

“If you give them more, they perform more,” Farrow said. “Instead of just me telling them what to do, they take on a lot of responsibility. They will feel more pride in their accomplishments. We all did this together, so it feels like more of a collective program.”

That mindset has led to tremendous growth for both the Firebirds and Lions early in the season, which was evident Saturday afternoon during the Free State Invitational at LHS.

In the 12-team tournament, FSHS placed third as a team with a score of 97.200. The Firebirds have now finished in the top three in each of their first three meets. Lawrence High, meanwhile, placed fifth with 91.600 points.

“(Coach Farrow) pushes us really hard, and I think that is why we are improving so quickly,” junior Beth Brandt said. “We do conditioning, we have set goals for each practice. I think having the structure of practice be like that just makes us work harder and we are able to accomplish more at meets.”

Brandt was one of five city gymnasts to earn an all-around ranking in the competitive meet. She notched 18th, which included a 13th-place finish in beam. Reece Wohlford placed 23rd after netting 15th place in both beam and floor.

Sophomore Paris Spotted Tail led the Lions on the day, as she notched fifth place overall. Spotted Tail’s best mark came on floor, when she scored 8.950 to finish as a runner-up in the event.

Chaney Finkeldei secured eighth in the all-around ranking after closing out the meet with a seventh-place finish in floor. Tori Crockett, Ashley Mai and Avery Qualseth all helped contribute to Free State’s third-place finish as a team.

“I think the team has looked pretty good,” Williams said. “I think if we really try our best, and we put all our effort into every practice, I think we could possibly win state.”

While there is still a long way to go before the postseason, it is clear that both squads have plenty of reason to be optimistic with how quickly they are improving already.

“It is a full process,” Farrow said. “We are reprogramming the entire gymnastics organization, at least for Lawrence. And it is exciting that the girls get a hands-on approach.”

Nelson notched first with a time of 17:05 to lead the way for the Seahawks. Diego Klish, a sophomore, came away with a 29th-place finish with a personal-best time of 19:21 in the varsity boys race.

On the girls side, freshman Oona Nelson etched her name into the record books. She finished second with a time of 20:38, which is a school record. The Seahawks were short a few players, so they did not finish in the team standings.

After a back-and-forth battle, Bishop Seabury’s soccer team came away with a 6-5 win Friday night over Heritage Christian Academy.

Beck Oldridge recorded a hat trick, connecting on the game-winning score in the 36th minute on a strike with his left foot. Evan McHenry scored a pair of goals, while Freddy Comparato also notched a score. It was an impressive performance by the Seahawks, who were short handed due to multiple injuries.

Bishop Seabury will play at KC East on Tuesday.

A number of Free State cross-country runners earned a medal in a tough meet at the Millard South Invitational.

On the girls side, Free State scored 214 points to secure seventh. Lincoln East won the event with 33 points. Erin Fagan led the Firebirds with a time of 20:23.80, which was good enough for 23rd overall.

Diana Messick finished eighth in the varsity girls race with a mark of 21:12.00, while Lucy Hardy placed 10th with a time of 21:40.40. The Lions ended up in sixth in the team standings.

On the boys side, Jack Ryan registered a sixth-place finish with a time of 17:21.70. Lawrence’s boys cross-country team took seventh as a team.

Lawrence will compete in a meet at 8:30 a.m. Saturday at Baldwin Golf Course.

The Lions scored 19 points, which matched Emporia for seventh out of eight total teams. Blue Valley won the tournament with 56 points, while Shawnee Mission East placed second with 52 points.

LHS will host a quadrangular at 3 p.m. Monday.