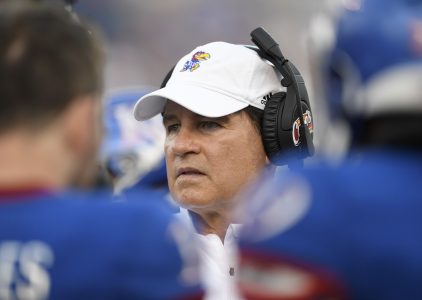 To fully understand what plagued Kansas during its 12-7 loss to Coastal Carolina, look no further than one single play early in the fourth quarter.

On 4th-and-4 from Coastal Carolina’s 17-yard line, the Jayhawks appeared poised for some more fourth-quarter magic. They trailed 12-7, and opted against kicking a field goal Saturday night at David Booth Kansas Memorial Stadium.

The only problem was that Les Miles and company wasn’t certain what it should run on its most important play of the night. And that is because the offense had struggled to get much going, even with the return of sophomore running back Pooka Williams Jr.

So Miles called a timeout to mull things over. Then, after the Jayhawks trotted out a similar formation, the Chanticleers called a timeout. Miles then burned KU’s final timeout with 14:22 remaining before the snap.

After back-to-back-to-back timeouts, the play finally happened. But the result was anticlimactic.

Redshirt senior quarterback Carter Stanley initially appeared to line up under center before falling back to shotgun. He received the snap and immediately rolled right. Stanley, who had already thrown two interceptions on the run, decided to gain the necessary yardage with his legs.

Coastal Carolina (0-1) was all over him, though, and Stanley’s lunging effort was nowhere close to converting.

The Chanticleers then ate up the next eight minutes of clock before missing a field goal attempt. KU’s last-ditch effort for a comeback drive ended a few plays later. The Jayhawks fell to 1-1 under Miles due to their inability to get anything going on the offensive end other than the game’s opening drive.

On the first possession, Kansas jumped out to a 7-0 lead on a 41-yard touchdown run by Khalil Herbert, who bounced to the outside on his first carry of the night. Coastal Carolina scored with 41 seconds left in the first half on a 20-yard touchdown reception by junior running back CJ Marable.

The Chanticleers took the lead for good on an 8-yard touchdown run by Marable with 07:58 left in the third quarter. In the end, the Jayhawks mustered just 5.0 yards per play. They were also 0-for-3 on fourth down in the loss, which included a questionable double reverse call on 4th-and-1.