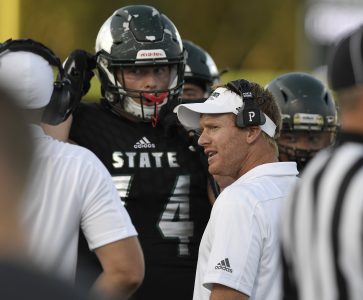 Head coach Kevin Stewart talks to the team during a timeout against Olathe West Friday night at FSHS on Sept. 6, 2019.

For the first time in program history, someone other than Bob Lisher served as Free State’s head football coach. The first game of the Kevin Stewart era appeared to be business as usual for a program that has won double-digit games in back-to-back years.

After scoring on the first four offensive possessions, Free State rolled past Olathe West for a 45-19 win Friday night at FSHS.

“It was fun,” Stewart said. “People asked me all day if I was nervous. I really wasn’t nervous, I was just anxious and excited to play some football and see how we looked. I thought the offense really stepped up big those first four series. I felt good and comfortable after that.”

Under Stewart, who is a former Blue Valley North assistant, the Firebirds plan to run more of a spread offense. They wanted to take advantage of mismatches by utilizing more pass concepts than this program has typically been known for.

Yet the first two drives of the 2019 season looked eerily similar to how FSHS (1-0) operated under Stewart’s predecessor.

Following a three-and-out by Olathe West on the opening drive, Free State made quick work of things. The Firebirds ran four total plays, all of which were runs out of a two-back shotgun set with senior Jay Taylor and junior Tyler Bowden. Senior quarterback Colter Maldonado punctuated the opening drive off with a 63-yard touchdown run on a speed option play.

Junior Ryley Wheat then picked off the first pass attempt of the night to gift FSHS favorable field position. Four plays later, Bowden punched things in from 2 yards out to give the hosts a 14-0 advantage.

Maldonado and company then attacked the Owls through the air. Maldonado and senior receiver Tate Fanshier linked up for a 47-yard touchdown connection on a streak down the right side. Fanshier simply beat the Olathe West defensive back on a ball that was slightly underthrown.

One drive later, that Firebird tandem hooked up again. On the third play of the fourth offensive drive, Maldonado lofted a ball to the corner of the end zone. Fanshier, once again, leaped above a defender to catch an 8-yard touchdown pass in traffic.

“Kid is a baller,” Maldonado said of Fanshier. “I trust him. I trust all my receiver, they are all good. Tate was doing good, so I just kept throwing to him.”

For good measure, Free State took a 29-7 advantage with 47 seconds remaining after a snap went over the head of the Olathe West punter, which resulted in a safety.

However, that is when things stalled for the Firebirds. Penalties and miscues on the offensive line prevented Free State from adding to its lead before the half.

“(Stewart) brought the energy, he stayed positive throughout the entire game,” Maldonado said. “That really helped us, because we got down sometimes.”

Free State’s defense, meanwhile, did its part to keep Olathe West from trimming into the deficit. Senior linebacker Ben Miller forced a fumble with a big hit on the quarterback on third down, and senior Lovette Epelle came away with the recovery.

Senior Devon Buck, sophomore Tai Newhouse and Epelle provided plenty of pressure from the defensive line. Senior linebacker Malik Berry and senior linebacker Joey Eddis made multiple key stops to contain the Owls’ offense for much of the night.

But Free State’s offense bounced back on the first play of the second half, as Bowden ran up the middle for a 73-yard touchdown. After that long run, the Firebirds started to lean on the ground game behind an offensive line unit of Turner Corcoran, Ryan Lutz, Tyler Gourley, MJ Issa and Frankie Calderon.

Bowden, who carried the ball 10 times in the first half, was the focal point of the rushing attack. He finished with 174 rushing yards on 18 carries during his first outing as the replacement for Jax Dineen, who is now a fullback with Kansas State.

“I thought Tyler looked fantastic,” Stewart said. “He’s shifty and hard to tackle. I thought he looked awesome. A few penalties got some of his runs called back.”

Taylor and senior Tae Rainey were also involved in Free State’s ground game, which ran for 345 yards on 42 carries.

When Maldonado did go through the air, he was still effective. He completed 8 of 10 passes for 149 yards. Fanshier hauled in a pair of touchdown scores. Senior Marcus Preston, who transferred from Mill Valley, also netted a 30-yard touchdown grab from Maldonado midway through the third quarter.

And the game was never in doubt after that, though it wasn’t always pretty. Free State committed 13 penalties in the season opener, leaving a lot to be desired in a lopsided victory.

“We are just going to enjoy it tonight,” Stewart said. “Then tomorrow, we are going to see what mistakes we need to fix. We had some good plays, but we had a lot of mistakes. First game, that is to be expected.”

Free State will travel to Olathe East at 7 p.m. Friday.