Area football preview: LHS football ready to move on from 2018 with new gear 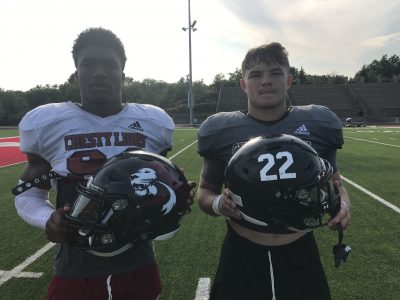 Gone is the single stripe down the Lawrence High football helmet.

For the first time in a long time, LHS will have a new look this football season. The new helmet design, which was voted on by the team in July, will feature a Lion on one side and the player’s number on the other.

“It is going to make a lot of people upset,” junior linebacker Cole Mondi said. “But I love them. I think they look sweet.”

Over 85% of the votes were in favor of switching the design up, even though it might be considered controversial for a program with as much tradition as LHS. Yet the program, which has won 27 state titles, has always been more than that.

“Lawrence High is more than a stripe on a helmet,” head coach Steve Rampy said. “It is the way they play. It is the passion. It is not tied to a stripe. They have had that stripe on that helmet for 25 years.”

The helmet design isn’t the only thing new this fall for LHS. Lawrence also has new jerseys and pants for games. The team even has new practice jerseys, which have “9.1” on the front.

Players had to help raise money in order to get new gear, but they found out in February that the new practice and game jerseys were going to come. It wasn’t until this past summer that they settled on switching up the helmet design for 2019. 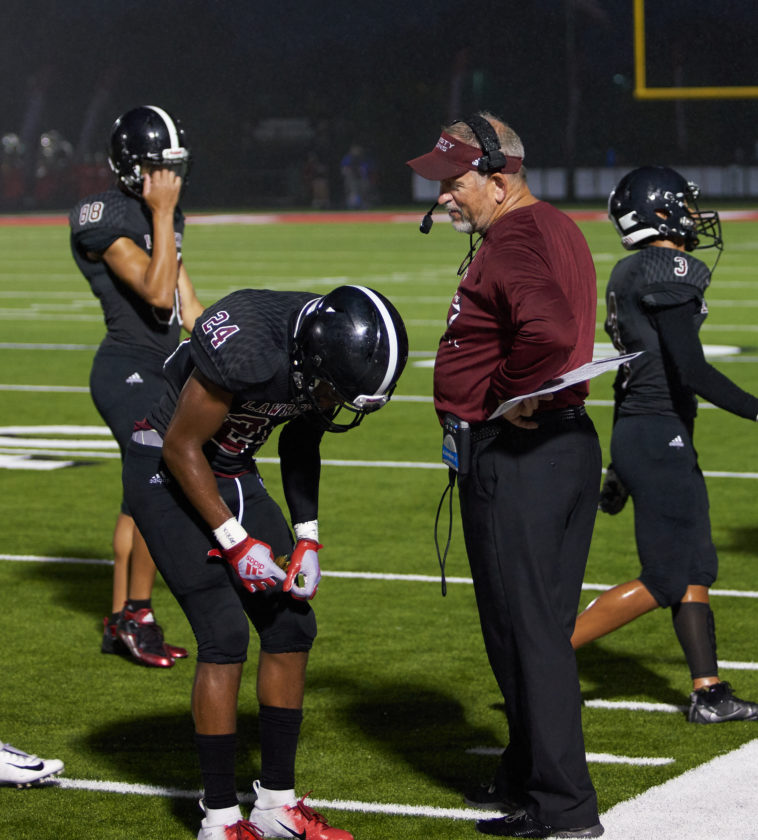 Lawrence High player Devin Neal (24) walks off the field with disappointment as LHS head coach Steve Rampy tries to talk to him late in the second quarter on Friday, Sept. 7, 2018 at Lawrence High School.

Rampy’s first year didn’t go as planned, at least in terms of wins. But it is clear he’s building something, and a leap in Year 2 doesn’t seem far-fetched.

“New coach coming in to try and change the program around and hopefully win that state championship,” junior running back Devin Neal said. “It starts in the locker room and coming to the field. Now we just changed it to the helmets.”

For an example of the culture change, look no further than the mantra on the team’s practice jerseys. It is an expression created by Rampy, encouraging each player to do his job. Most football coaches use the slogan 1/11 in regards to that, but Rampy wanted something different.

He first introduced the concept of 9.1 at his introductory meeting with the team. He put it on team shirts last year and decided to place it on the practice jerseys starting this season.

“It is a constant reminder that they have to do their 9.1,” Rampy said. “They want to do well. They want to turn this thing back around. They want to take Lawrence High football to where it was before.”

And that could start as early as this fall, especially with a new look on Friday nights.

It helps that LHS returns talented juniors who gained experience as sophomores. Junior quarterback Jackson Dooley has a better understanding of the offense after earning the first start of his career in the playoff loss to Derby.

Dooley has weapons at his disposal, too. Neal and junior running back Graham Hough will be a lethal 1-2 punch in the ground game. Junior Tre’ Jackson, who started at quarterback most of last fall, is going to have a role on this offense still.

Senior receiver Chris McGee will be tough matchup for opposing defensive backs again. LHS dealt with inconsistency on the offensive line last fall, but that unit should be improved. Mondi, meanwhile, figures to anchor a defense that is losing key pieces from last year.

LHS can show its growth as early as the season opener against Olathe South, which is a rematch from last year’s Week 1 tilt. Lawrence suffered a 26-10 loss after scoring on the first play of the game.

“It is hard to watch our Olathe South film last year,” Rampy said. “This year, we should be a better team. We know what we are doing. I’m excited; I can’t wait to watch them play Friday. I’m as big of a fan as anyone in that stadium. I want to see how they play.”

Despite a new coach, Free State hopes to take care of business in the season opener.

The first game of Kevin Stewart’s career as a head coach will take place against a program in its second year. The Firebirds rolled to a 41-0 win over Olathe West in Week 1 last season. The Owls went 5-7 (1-6 Sunflower League) in their first year as a program.

“We have been working for a long time,” Stewart said, “and it is time to play a game.”

A rematch from Sean Hayden’s debut with Eudora will take place this week.

Last season, this opening-week matchup for EHS ended with a 28-7 road loss to KC Piper. The Cardinals have more talent this year, including senior TE/DE Sloan Hayden. The younger brother of Eudora’s head coach is already verbally committed to Missouri State.

This might be the area’s best game of the week.

Both teams were considered by Kpreps in the preseason top five for Class 4A, and a win could help propel one squad to a top-five ranking. THS lost this game last year by a 42-6 margin, though it recovered and put together a seven-game win streak to finish with a 7-3 clip. Basehor-Linwood is coming off a 10-2 campaign.

The David Bowen era could start off on the right foot.

It is no secret that Perry-Lecompton has to replace a lot from last year’s team.

After back-to-back seven-win seasons, though, PLHS should be prepared for the first game of the year. Last season, Perry-Lecomton thrashed Royal Valley by a 68-0 margin. Royal Valley hasn’t posted a winning record since 2015.