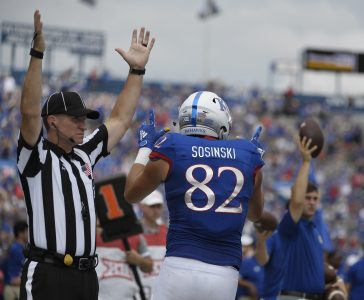 With 8:40 left in the third quarter of KU’s game against Indiana State, senior tight end James Sosinski found an opening. Senior quarterback Carter Stanley spotted Sosinski on the right side and dumped the ball off to the tight end who quickly ran into the end zone.

And it didn’t come easy, as the play also was reviewed by officials to determine if there was an illegal block downfield. Luckily for Sosinski, the touchdown wasn’t overturned.

“I didn’t even know they were going to review for that until someone told me and I was like, ‘No way,'” Sosinski said. “But I’m just glad it didn’t go back.”

It’s been a journey for Sosinski, who finally made his first impact on the football field. It wasn’t his first time scoring in a KU uniform, though.

The touchdown Saturday marked Sosinski’s first points since a bank shot in the 2018 Final Four against Villanova with the KU men’s basketball team.

Sosinski has fond memories of his time with basketball, even joking that Villanova had a tougher defense than Indiana State. But his first love has always been football, making Saturday’s score much more meaningful.

“Not that the Final Four score didn’t matter but it’s just been a long road, especially seasons past,” Sosinski said. “All the work that we’ve put in, too, this winter, this summer, this camp. It was great to show the hard work pay off.”

Even with little previous playing time and this being his third year at KU, he confirmed he never thought of walking away from football.

“I always just love the game too much to just give it up,” Sosinski said. “I’m glad I stuck with it and kept going.”

Sosinski points to this past offseason as a turning point. This past fall camp was one of the hardest things he’s ever done, with new head coach Les Miles and his staff pushing him to work on his speed, strength and blocking.

What also stood out to Sosinski is Miles and his staff letting players know “what they can do and their potential” this offseason.

One of those situations transpired in the eight play, 75-yard game-winning drive for KU against Indiana State, which was punctuated by a reverse-throw, 2-point conversion from junior wide receiver Andrew Parchment.

“It was a position that a team who didn’t have the experience in coming back in those games, gave them the experience that they needed, which was to play very, very competitive and tight quarters,” Miles said after the game. “I don’t know that I’ve enjoyed a group of men and a team and their effort any more than the one that I enjoyed right here (Saturday).”

“I feel like we just all stepped it up a notch and have been working really hard,” Sosinski said, “just to get the goal of winning and it felt good to get it today.”

Again, that comes back to Miles.

“(Miles) instills confidence, just throughout drills and just telling me how to catch the ball and all that,” Sosinski said. “I feel like he’s helped me out a lot just with our overall confidence and playing the position of tight end.”

Now with newfound confidence and tangible evidence of success on both the football field and basketball court, is it fair to call Sosinski “Big Game James”?