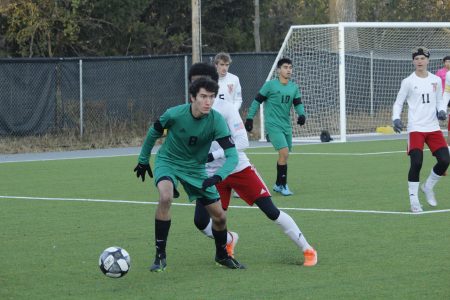 Free State senior forward Nathan Herschell looks for a teammate to pass to in the 6A regional final Thursday, Oct. 31, 2019. The Firebirds defeated LHS 1-1 (4-3).

As senior defender Hayden Robinson’s penalty kick sailed into the back of the net, pandemonium ensued on Free State’s soccer field, with players and fans alike swarming the team in celebration

“When Hayden made that (last kick), I just wanted to cry,” senior midfielder Peter Boncella said. “I was so excited.”

While these two teams are certainly familiar being crosstown rivals, they’re also no strangers to overtime. LHS and Free State played to a 0-0 draw on Oct. 15.

For the Firebirds, they were scorewatching following their 3-1 win Tuesday over Liberal.

And as LHS upset the No. 2 seed Washburn Rural 2-1, the City Showdown rematch was set.

“We were all so excited to play them,” Boncella said. “We wouldn’t want to play anyone other than them (in a regional final).”

This time around, though, it wouldn’t be another scoreless draw. In the 16th minute, Anderson dribbled his way around the Free State defense before slotting a shot across the face of goal and into the back of the net to take a 1-0 lead.

“I dribbled, saw the opening, and took it,” Anderson said. “That was my goal to put us up and keep putting us up.”

Anderson and LHS just grew more aggressive as the first half wore on, up until LHS sophomore goalkeeper Grant Glasgow was issued a red card for a tackle on Boncella just before halftime.

Boncella said in those situations with the ball played over the top, his club coach has told him to just go for it.

“And I just gambled on it and went through,” Boncella said. “I took a touch and the goalie just took me out. That was a really big moment in the game for sure.”

The foul was just outside the box, but Free State senior midfielder Pete Junge’s ensuing free kick was off target.

Regardless, LHS held a 1-0 lead at halftime and controlled much of the first half, even playing with 10 men down the stretch. Boncella said the Firebirds focused on how they could be playing their final game with this group of 11 seniors.

“It was a big motivator that this could be the last time playing with each other,” Boncella said.

And it was Boncella who put the Firebirds back in the game in the 46th minute. In a 2-on-1 situation, junior midfielder Krishi Sabarwal played the ball to Boncella who sent an equalizing shot into the top left corner of the goal.

“I was just running back post and I saw Krishi get the ball and I was wide open,” Boncella said. “I saw the keeper coming over so I just put it where he came from. He had no chance.”

But scoring chances dropped off drastically for the rest of the second half. Even down a player, LHS’ backline held strong through a relentless push by Free State’s wings and forwards.

On the other end, Anderson made deep runs into Free State territory but never caught quite the same opening as his goal-scoring chance from earlier.

So once again, LHS and Free State sat 1-1 at the end of regulation.

“It was exhausting, but it’s one of those things you have to push through because any mental lapse could lead to a goal,” Boncella said.

But it was more of the same in overtime, as 30 extra minutes passed without a goal scored by either side.

“It’s frustrating, but they’re a good team,” Boncella said. “It doesn’t matter how good each team is, it’s always a rivalry. We always play to each other’s levels and it’s always a good game.”

On the other side, the loss stings for Anderson. This season has been a “really fun time” with this group, and just adds motivation for his senior season.

“Well I definitely don’t want to feel this kind of heartbreak again,” Anderson said. “There’s nothing stopping us from winning it next year.”

Free State, elated and celebrating on the field, was bursting with energy. It’s a feeling Boncella’s never felt before.

“I’ve never won a big title like this,” Boncella said. “It’s only something I’ve ever seen on TV. To live through it, it’s amazing.”

In the 4A bracket, Eudora claimed a regional title of its own, with a 2-1 win in triple overtime over Pittsburg. This is the first regional title for Eudora in school history.

Baldwin and Heritage Christian Academy also played a bit of an overtime thriller. While the Bulldogs pushed the match to a second overtime, the home side ultimately fell 2-1. Baldwin finishes 11-6-2 on the season.