A look at notable numbers ahead of Sunflower Showdown 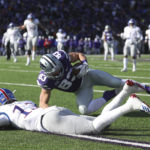 It is no secret that this year’s Sunflower Showdown has a little bit more juice to it than previous years, and that’s a credit to how both teams have played as of late.

Both teams have really been playing better since the bye week in Week 7, however. The Wildcats have won two games in a row, while the Jayhawks nearly knocked off Texas in their first game with Brent Dearmon as the offensive coordinator.

All of that is to say that this year’s rivalry matchup figures to be the best one in a decade. K-State has won 10 games in a row in this series, though KU has seemingly closed the gap recently. Last season, Kansas suffered a 21-17 loss to Kansas State in Manhattan.

So to get a better idea about how both teams stack up ahead of this week’s matchup, let’s take a look at some notable numbers for both the Jayhawks and the Wildcats entering the 2019 version of the Sunflower Showdown. (All stats via http://cfbstats.com)

On the surface, Kansas State figures to be the best defense that Kansas has faced since Dearmon took over play calling duties. The Wildcats are allowing 369 yards per game, which ranks fifth in the Big 12 through seven games.

But that doesn’t necessarily tell the whole story. K-State is giving up an average of 6.39 yards per play, which is only better than two teams in the conference. Those teams are, as you probably guessed, Texas and Texas Tech. So this actually will be the toughest defense that KU has faced since the bye week, just not as much of a test as the total numbers might indicate.

It is a long way of saying that the Jayhawks should be able to have success on offense for the third week in a row.

The Wildcats want to run the ball and control the clock, which is a big reason why their defense hasn’t been on the field as much.

K-State is averaging 43 rushing attempts per game, which trails only Oklahoma State and TCU in the Big 12. The Wildcats are picking up 4.64 yards per carry, a number that actually ranks eighth in the conference.

KU’s defense, meanwhile, has struggled to defend opposing ground games this season. The Jayhawks are allowing 45.50 carries per contest, which is the most in the league. KU’s defense is giving up 4.88 yards per carry, good for ninth in the Big 12.

It could all come down to the red zone on Saturday.

While KU’s defense has struggled to get stops, it has managed to step up in the red zone this season. The Jayhawks have only allowed 33 total scores (25 touchdowns) on 40 red zone trips. That 82.50% conversion rate by KU’s defense ranks 59th in the nation.

In comparison, Kansas State has typically scored when it gets in the red zone this year. The Wildcats have scored on all but two of their 34 trips as an offense, which includes 24 touchdowns. TCU and Iowa State are the only Big 12 teams that have a better scoring rate than K-State.