‘I was playing for him’: Kansas defense steps up following Bryce Torneden’s ejection 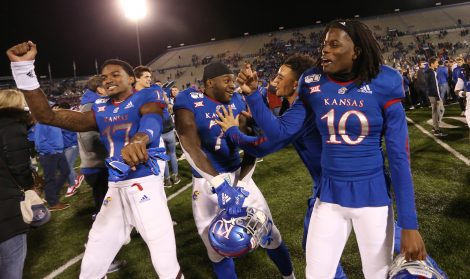 Kansas senior safety Mike Lee didn’t agree with the call, but there was no looking back after it happened.

With 7:21 left in the first quarter, senior Bryce Torneden was ejected for targeting with his helmet while in punt coverage. The officials sent Torneden to the locker room after a lengthy review, ending his night early.

Torneden could only watch, as Kansas eventually claimed a 37-34 win on a last-second field goal by Liam Jones Saturday night at David Booth Kansas Memorial Stadium. The defense still made key stops late to help the Jayhawks earn their first Big 12 win of the season.

“They already kicked him out, so I was like, ‘Everything I do is for you,'” Lee said. “I was playing for him.”

While Lee and Torneden both have a strong bond as senior safeties, it was clear that the entire KU defense shared that sentiment. They wanted to earn a win for Torneden, who hasn’t experienced very many conference wins over his KU career.

“When Bryce went out, everybody wanted to do it for him,” sophomore safety Davon Ferguson said. “It is his senior year, it was his last homecoming and he wasn’t able to play. So we just wanted to let him know that we got his back.”

The defense forced a pair of three-and-outs on Texas Tech’s final two possessions, setting the stage for the late-game heroics. Fans ultimately rushed the field in celebration in what turned out to be a wild postgame scene for the Jayhawks.

Yet, even though Torneden wasn’t involved in KU’s third Big 12 win in the last four years, it didn’t stop him from celebrating after the game.

“Bryce had one of the biggest smiles that I have ever seen on his face,” Ferguson said.

Players found a way to step up without the team’s leading tackler. Senior safety DeAnte Ford, in particular, filled in at Torneden’s position and was effective for much of the night.

“I would give him an A+ for him stepping in and filling that role,” senior linebacker Najee Stevens-McKenzie said. “He’s been doing his job all year, but to see him under the lights and being the starter was really huge. He more than stepped up to the plate.”

Ford finished third on the team with six tackles, all of which were solo. And his biggest play of the night came when the Jayhawks need it the most.

After a punt by Kansas, Texas Tech began its drive on its own 20-yard line with a 34-27 lead at the 10:26 mark in the fourth quarter. After an incomplete pass on first down, the Red Raiders elected to run the ball on second down.

Ford hit Ta’Zhawn Henry for a 2-yard loss on second down, forcing Texas Tech in a 3rd-and-long situation. The Red Raiders were unable to convert, which marked their first three-and-out of the night. A few minutes later, Kansas evened the score to put pressure on Texas Tech.

“He was where he was supposed to be and made plays that we needed to make,” Ferguson said of Ford’s play.

Torneden will be back for the Sunflower Showdown this week, but Ford proved that he’s more than capable of holding his own when the Jayhawks need him.