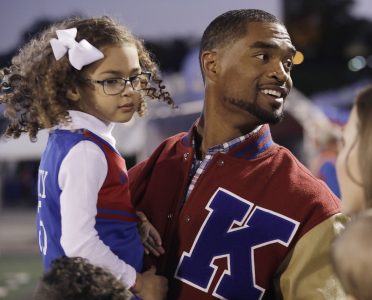 Former Kansas football player Darrell Stuckey was honored at halftime with the Ring of Honor during the Kansas-Texas Tech game Saturday at Memorial Stadium.

In the days leading up to his Ring of Honor ceremony Saturday night, it wasn’t an interception or some type of game-swinging takeaway that stood out to former Kansas football safety Darrell Stuckey, as he reflected on his days in the Jayhawks’ secondary.

In fact, when asked earlier this week what highlight he would want to see played on the video board inside David Booth Kansas Memorial Stadium as his name was unveiled on the opposite end, Stuckey remembered a play that began quite poorly for him.

“He broke my ankle,” Stuckey began, fondly remembering getting beat at the line of scrimmage by Louisiana Tech receiver Phillip Livas in a nonconference home game in 2008.

Of course, what happened after that is what made it memorable for Stuckey.

“I kept believing, kept running and I tackled him at like the 6-yard line or 3-yard line or something like that,” Stuckey said.

“But the crazy thing is the very next play I got a tackle for loss and I celebrated it. And all the wind in my system was gone after that. I should not have celebrated. I jumped as high as I could,” Stuckey shared, adding he was lucky that the quarterback didn’t throw to his man on the next snap.

“And then we held them. And I think they missed the field goal. It was 29-0,” Stuckey accurately recalled of a Week 2 victory more than a decade ago. “Nonconference game, I think that sets the tone for your defense. It really makes your defense realize that every play is important.”

Coached at the time by Mark Mangino, who returned to Lawrence to watch Stuckey’s ceremony in person, Kansas went on to finish 8-5 that season and win the Insight Bowl.

Stuckey, during the break between the first and second quarters in Saturday night’s KU-Texas Tech game, officially became the fifth member of KU’s Orange Bowl-winning team to join KU’s Ring of Honor.

His name is flanked on either side by those of quarterback Todd Reesing and defensive back Chris Harris Jr. Cornerback Aqib Talib and offensive lineman Anthony Collins are next to the trio on the northeast corner of the old venue.

The KU defense had to play most of Saturday night’s homecoming game against Texas Tech without its leading tackler.

Senior safety Bryce Torneden, who was in for the Jayhawks’ punt coverage unit, as usual, got ejected after a video review by the officiating crew determined he led with the crown of his helmet while closing in to make a hit on Tech returner Chux Nwabuko. Torneden was penalized for targeting and, by rule, ejected, with 11:06 remaining in the first quarter.

Senior DeAnte Ford replaced Torneden, as KU lost another starter on its defense, which already was playing without injured linebacker Dru Prox and safety Jeremiah McCullough.

Saturday marked a bit of a first for KU receivers coach Emmett Jones, who could look across the field and see players he spent most of his time around just a year ago.

The Red Raiders’ outside receivers coach the previous three seasons, Jones moved on from Tech to join Les Miles’ staff after Kliff Kingsbury was fired following the 2018 season.

Tech’s current outside receivers coach, Joel Filani, worked on the same staff as KU’s special teams coordinator and inside linebackers coach, Mike Ekeler, at North Texas in 2016. Ekeler was the North Texas DC.

Ekeler would also work with Tech running backs coach DeAndre Smith the next season, at North Carolina where Ekeler was the linebackers coach.

The two also crossed paths on the College Football Playoff Selection Committee from 2015-17.