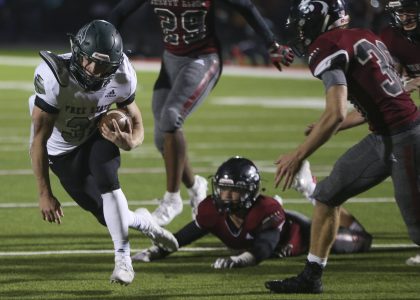 Free State running back Tyler Bowden (31) rushes through Lawrence High defenders in a game at LHS Friday night on Oct. 25, 2019.

As soon as Lawrence High quarterback Jackson Dooley’s fourth down pass attempt fell harmlessly to the turf, Free State’s defense sprinted to the sideline in celebration with 3:19 remaining in the game.

The FSHS crowd roared in approval, as the failed conversion essentially capped off a thrilling City Showdown on Friday night at LHS. Free State secured a 31-30 win, notching its fourth consecutive victory in this crosstown clash.

FSHS now owns a 15-8 advantage in the all-time series.

“It was big when we got that fourth-down stop at the end,” Free State’s first-year head coach Kevin Stewart said. “The main thing we talked about (at halftime) was composure. I told them that if we clean those up, we’d be able to get right back in the game.”

“I think it can (help us get back on track),” senior linebacker Cole Morris said. “It reminds us where we came from last year with the loss and how it feels. It is going to make us work even harder, we don’t want to feel this again.”

But the 23rd edition of the City Showdown lived up the hype, in what was considered the best rivalry matchup since 2012.

After trailing by a 21-10 margin at halftime, the Firebirds were given new life after a pair of turnovers early in the second half. Lawrence fumbled on the opening kickoff return, and Free State scored three plays later on a 28-yard touchdown run by Tyler Bowden to trim the deficit.

One possession later, senior Wyatt Durland picked off a pass attempt by Dooley in the endzone. The Firebirds promptly scored six plays later on a 30-yard touchdown run by Bowden, who shoved off multiple tackle attempts en route to an impressive scoring run.

“After that, I was like, ‘Oh yeah, we got this,'” senior Malik Berry said. “We just needed to keep up the momentum.”

LHS answered on the next drive, when Neal punched things in from 1-yard out to cap off a 11-play drive. Malik Berry, who took over as starting quarterback in the second half after Jet Dineen earned the start, had the last laugh. He delivered a 1-yard sneak on the next drive that proved to be the go-ahead score.

The Lions then made things interesting on a safety by junior Corban Oberzan with 5:03 remaining. Lawrence was then ultimately stopped on the final drive, which ended with Dooley throwing an incomplete pass on 4th-and-5 from its own 35-yard line.

“I expected a little bit better on the defensive side of the ball,” Morris said. “There are a lot of errors that we need to get fixed.”

But the latest installment of the City Showdown had it all.

“Tyler is a warrior,” Stewart said. “People don’t know how hard he works in the weight room. He’s the hardest worker on the team. He’s just got a big heart too.”

Now, Lawrence will turn its attention to the postseason after an impressive regular season. The Lions went 7-1 after winning just one game in all of 2018 during their first year under head coach Steve Rampy.

Last season, LHS lost to eventual state champion Derby in the first round of the 6A playoffs. This time around, Lawrence will be the No. 6 seed in the 6A West bracket and play host to Washburn Rural in the opening round.

“We have to keep our heads up,” Morris said. “That is one loss out of eight. We still have a whole playoffs ahead.”

Free State, meanwhile, ends its 2018 campaign on a six-game win streak and will be the No. 5 seed in the 6A West. FSHS plays host to No. 12 Wichita South in the opening round next week.

For now, though, the Firebirds are going to relish a hard-fought win and hope it is a sign that they are hitting their stride at the right time.

“Coming into this, we knew we were the underdogs,” Berry said. “Coming out as the underdogs always feels good. It wasn’t given to us, this whole week of practice we talked about culture. I think we handled our business pretty well.”