Preps notebook: More than bragging rights on the line in this year’s City Showdown 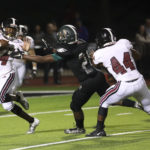 During the boys basketball version of the City Showdown this past winter, Free State’s student section broke out in a “Let’s play football” chant. It came two years after FSHS students painted their chests “56-7”, which was the final score of the 2016 football game, at the basketball contest at Allen Fieldhouse.

“You want the bragging rights,” Lewis said. “You don’t want to be at the basketball game hearing 56-7 or let’s play football. There is a lot behind it.”

Lewis, along with the rest of the LHS senior class, has yet to defeat Free State on the gridiron.

The Lions’ last win in the City Showdown came via a 14-12 victory during Week 3 of the 2015 season. The Firebirds have since won three games in a row, and own a 14-8 advantage in the all-time series.

For Lawrence’s senior class, earning its first win over FSHS would be a memorable way to close out the final game of the regular season.

“I think it is important not only to break this streak, but to help set us on the path that we want to get on to get where we are trying to go,” senior receiver Chris McGee said.

While FSHS seniors haven’t necessarily talked about the streak this week, Turner Corcoran admitted that it would be nice to end his high school career with a sweep in this rivalry. The Firebirds have won the last three meetings by a combined 67 points.

“I’m 3-0 against them,” said Corcoran, who is committed to Nebraska. “Their seniors are itching to get back at us, and I don’t want to go out of this place without a win against Lawrence High.”

More than bragging rights will be on the line, however. This thrilling Week 8 matchup, which figures to be the biggest City Showdown since 2012, has huge postseason implications as well.

Lawrence is currently the No. 2 seed in the 6A West bracket with a +76 point differential, which is 10 points better than unbeaten Dodge City. Free State, meanwhile, is the No. 5 seed with a +69 point differential.

A win for the Lions could potentially bump the Firebirds a few spots down, which might even set up a potential rematch between the two teams in the second round.

It remains to be seen how postseason seeding will ultimately be impacted, but it is clear that this game will be important to both teams.

“This is not our last game of the season,” FSHS head coach Kevin Stewart said. “Obviously the guys want to win. But we have to get better every single day, focus on the process not just the outcome.”

This year’s City Showdown has it all, but the battle between two talented running backs could ultimately decide the outcome.

Two of the more dynamic running backs in the state will be featured in this one. Junior Tyler Bowden has been a focal point of Free State’s offense as of late, while Lawrence High junior Devin Neal has made a number of highlight plays this season.

“Devin Neal is a really good football player; he’s got good athleticism and good size,” Stewart said. “I feel like Tyler gets a little overlooked in some ways. Tyler is an outstanding running back.”

According to 810 Varsity, Bowden is No. 3 in the state in rushing through seven weeks. He has 946 yards and 12 touchdowns on 115 carries. Bowden is averaging 189.2 rushing yards per game for the Firebirds.

Neal, meanwhile, is not far behind with 843 yards and 14 scores on 112 carries. Neal’s average of 140.5 rushing yards per game ranks sixth in the state. He is also featured in the passing game, hauling in 20 catches for 360 yards and four scores.

“I couldn’t be more excited,” McGee said. “Those are two really good running backs. It is just going to be a game.”

Behind a pair of goals from Beck Oldridge, Bishop Seabury’s boys soccer team claimed a 2-0 senior day win over Basehor-Linwood on Wednesday night.

The Seahawks ended the regular season on a remarkable run, claiming 10 wins in their final 12 matches. Bishop Seabury had to overcome a number of injuries, but will ultimately get a chance to host its first regional match at 4:30 p.m. Tuesday.

Bishop Seabury (10-5-0) will find out its postseason fate this weekend.